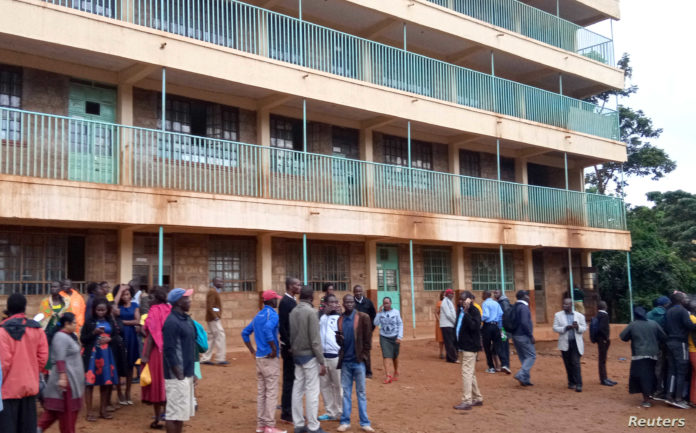 Could the tragedy that occurred at Kakamega Primary have been avoided? This seems to be what the DCI is suggesting in preliminary investigations.

According to Western region Criminal Investigations Officer Shem Nyamboki, preliminary investigations indicate that teachers at the school had restricted pupils to using only one of the two staircases in the building and reserved the other for themselves.

Sixteen teachers from Kakamega Primary School have so far recorded statements with police as investigations into the stampede that killed 15 pupils a week ago continue. Mr. Nyamboki said detectives were planning to record statements from pupils and other witnesses.

According to Mr Nyamboki, three pupils out of the 15 who died in the stampede will be buried on Saturday. Those to be buried are Catherine Aloo from Butere, Lavenda Akasa from Ikonyero and Bertha Munywele from Esumiya in Lurambi constituency.

Once all statements are recorded, detectives will then compile a file which will be forwarded to the Director of Public Prosecutions (DPP) for perusal.

The DCI boss said should the DPP recommend that there was enough evidence to sustain a criminal prosecution in the matter, they will proceed to have those culpable for criminal negligence charged.

There is also a possibility that the DPP could recommend that a public inquest be held before a magistrate to determine what happened.

After the hearing, the magistrate will proceed to make recommendations on the next course of action based on the evidence of those summoned to appear and testify in the inquest.

“Investigations are proceeding well and we are trying to establish whether there was negligence on the part of the teachers and whether the evidence on record can support criminal culpability on their part,” said Mr Nyamboki.

The recording of statements from pupils was put off due to the ongoing counselling sessions by a team from the county government.

It targets pupils from Grade 4 and 5 who were affected by the Kakamega Primary tragic incident, including those injured in the commotion. Western region police commander Peris Kimani said investigations were at advanced stages.

Police have directed the school board of management to stop nine churches from conducting their services in classrooms at the school.

“These churches have been operating at the school for a long time and using the classrooms for worship. That has to stop,” said Mr Nyamboki. A post-mortem report indicated that the pupils died from suffocation.

This report was first published in the Daily Nation.

Form 3 Student In Police Custody After Beating Up Three Teachers