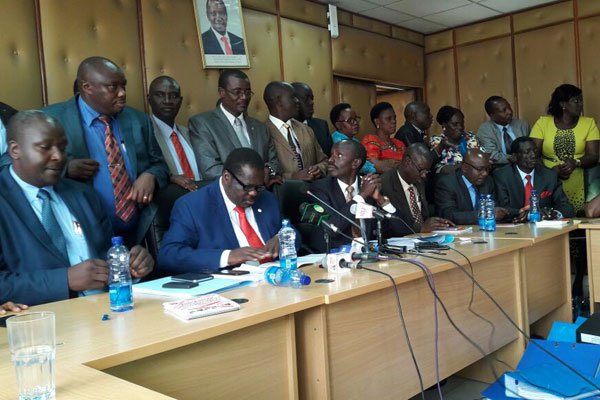 TSC-KNUT Talks: BY DAILY NATION: Blow-by-blow details of a confidential report prepared for discussion at the aborted meeting between the Teachers Service Commission (TSC) and the Kenya National Union of Teachers (Knut) last week can now be revealed.

The report of a 10-person special joint committee of the two parties formed to hammer a deal on the contentious issues ahead of the one-week Naivasha retreat failed to reach consensus on four of the six issues it was meant to tackle.

According to the eight-page document, the team could only agree on the controversial policy of delocalisation and transfers, pushing the bulk of the issues to the retreat whose discussions were halted on Wednesday after both parties failed to agree on the order of dispensing with the agenda.

According to the committee’s report, members agreed that TSC would strictly adhere to the provisions of the code of regulations for teachers in undertaking delocalisation policy.

The recommendation was, in effect, leaving the door open for TSC to continue with the controversial policy with the only rider being that the “commission adhere to the provision of the code of regulations in undertaking delocalisation” of newly recruited teachers and institutional administrators.

The team also agreed to propose to the retreat that the TSC employ a six-point criterion when making teacher transfers, chief among them that teachers above 55 years should not be transferred to new schools.

The team further proposed that TSC adopts a human face in the transfers, including the consideration of teachers’ health status and their families — in line with President Uhuru Kenyatta’s recent directive.

Where both husband and wife are teachers, the report suggests, the couple should be considered for favourable posting. Even then, the team proposed, such transfers should “preferably be held at the end of the year. The TSC should also consider the security of teachers in their places of work.”

For head teachers, the team said, the TSC should consider the status of the school to avoid moving teachers to institutions that were below the level of those they were being moved from.

Also to be considered would be the size of the school, its examinations mean score for the previous three years and the role of the sponsoring institution.

Teachers length of stay in an institution and the job group of the head teacher should also be considered, according to the report, which could not be discussed at the meeting because it collapsed before meaningful discussions could start. But the committee failed to agree on the transfer of Knut officials outside of their areas of jurisdiction.

Union representatives at the committee proposed that TSC moves all the recently transferred Knut officials to their former areas of work for the remaining periods of their term.

The unionists argued that the transfers had adversely affected operations of the union at the branch level. At the time the officials were sitting, the figure of affected union officials was 111, a figure than has since been revised down to 85.

But the TSC team at the talks disagreed with the union’s position arguing it could not offer a blanket transfer reversal of the branch officials.

“All teachers have individual contracts to serve anywhere in the country where their services as required,” the report maintains of TSC members at the committee.

According to the committee’s report, TSC members argued that a recognition agreement signed with the union in 1968 does not provide immunity to union branch officials against transfers. But the TSC members said there was always a window for the union officials to seek reviews, stating that “every appeal case will be determined on its own merit”.

The negotiating team agreed to escalate the matter of transfers for union officials to the aborted Naivasha retreat. TSC boss Nancy Macharia declined to comment on the report on Saturday saying it was a confidential document.

But after the collapse of the talks on Wednesday, Dr Macharia said the commission had the mandate to assign teachers to any public school or institution.

“Employees who hold elective offices in unions and saccos, among others, are primarily employed to teach and are bound by the code of regulations for teachers, which has provisions on transfers of teachers,” she said in a statement.

“Election to any office cannot, therefore, be used to irregularly amend the contract between an employee and employer,” she said of the Knut demands. Dr Macharia said TSC had agreed to release 111 Knut executive secretaries to work full time for the union.

“This is not even a legal requirement on the part of TSC but an act of magnanimity to promote cordial relations,” she said.

She added: “The union’s demand to exempt some elected officials from operational policies and regulations can only undermine provision of quality teachers and, by extension, quality education.”

The committee could also not discuss the issue of career guidelines for teachers that could enable then move from one cadre to another. Members of Knut and TSC were divided on the issue with the union team claiming it was not involved in the development of the guidelines.

The report said: “The (career progression) guidelines are in line with globally accepted human resources best practices since schemes of service have been declared limiting in providing for professional growth of employees.”

But the collapse of the Naivasha talks on Wednesday meant that a discussion on the report could not take off. It is understood Knut insisted that TSC revoke the transfers of the 85 head teachers holding union positions. The head teachers, who are members of Knut were transferred outside their counties this year.

The TSC also rejected a demand to have such head teachers exempted from future transfers, a move that saw deliberations on the issue pushed to another date. Efforts by TSC to persuade Knut to accept discussions on other issues failed.

Form 3 Student In Police Custody After Beating Up Three Teachers