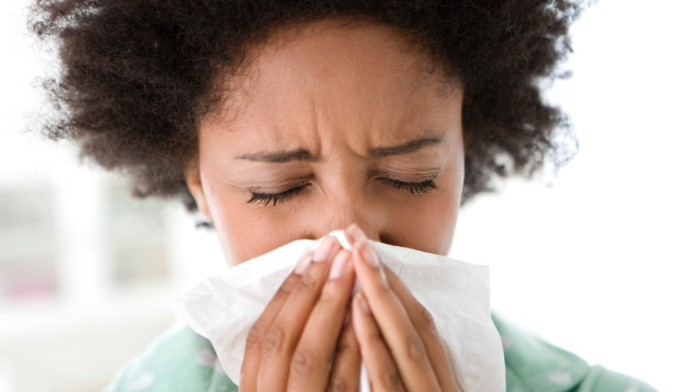 We’re exploring what really happens when you sneeze, and why it’s time to stop holding it in.

A sneeze often starts as a little tickle, having you reach in a mad scramble for the nearest tissue box, or even worse, simply clenching down on your mouth and hoping not to make a sound. But sneezing is way more complicated than you likely realize. A sneeze definitely starts in the nose, but it’s really a massively complex interaction between the nose, the brain, and the various muscles throughout your body.

“The main cause of a sneeze is some kind of irritation in the nasal lining that triggers the body to expel this foreign substance,” says Satish Govindaraj, M.D., director of rhinology and vice chairman of clinical affairs at the Mount Sinai Health System in New York City. Since your nose is designed to naturally filter the air you breathe, the “boogers” (read: mucous) inside your nostrils surprisingly acts as a dirt and bacteria trap. Believe it or not, the stomach later digests mucus and can kill any harmful bacteria that it has collected. But a sneeze is actually triggered by something that’s irritated your mucous membranes inside your nose, including allergens, irritants, or more importantly, bacteria linked to viruses like the common cold.

But particles in the air aren’t the only triggers for sneezing. More than 35% of us sneeze when suddenly exposed to bright light, according to Scientific American — a phenomenon that’s commonly known as photic sneeze reflex, or ACHOO (Autosomal Compelling Helio-Ophthalmic Outburst). It isn’t fully understood, but ACHOO may be caused by sensitivity to stimuli within the part of the cerebral cortex that processes the eyes’ sensory nerve impulses. Having a full stomach, breathing in cold air, and feeling cold could also be reasons why we sneeze frequently.

While that loud “Achoo!” may be embarrassing, it’s actually a sign that your body is in healthy fighting mode. Here’s what happens when we sneeze, and all the important reasons why you shouldn’t hold your sneezes in.

Sneezing gets rid of pesky germs.

The nasal mucosa (otherwise known as the tissue that lines the nasal cavity) can trigger a sneeze when it recognizes an intruder (such as a harmful virus or triggering allergens). It sends a message via the trigeminal nerve (which carries sensation from the face to the brain) to your brain stem. Jamie Kiehm, M.D., a New York City-based allergist and immunologist, explains that a series of nerve signals travel to different parts of your body — including the muscles found in your chest, throat, and face — to start the sneeze after you come in contact with something harmful in the air.

Sneezing allows waste to exit through your nose.

Which is why you should never pinch your nose while sneezing! Holding back a sneeze means all the harmful pollutants and bacteria that your nose has filtered will remain there. Nerve signals from your brain stem direct your mouth’s soft palate and uvula to move down a little; then, the tongue comes up to block the mouth so the majority of what you sneeze out will exit through your nose. Your eyes involuntarily close, and your diaphragm thrusts upward simultaneously as your chest muscles contract, pushing the air out of your lungs. Trying to stem your sneeze can impact this process, especially by pinching your nose, as this could direct that rush of air elsewhere (and potentially cause you severe pain).

Sneezing may also help you decongest.

Air is expelled through your nostrils at roughly 100mph — and since the tongue doesn’t seal off the mouth completely, some people expel a mixture of snot and spit from there too (thank us later for the mental image). Each sneeze can indeed produce up to 40,000 droplets, Govindaraj says, and these droplets can travel up to 10 feet.

Sneezing more than once could be a good sign.

Govindaraj says that it isn’t uncommon at all to sneeze more than once or multiple times in a row. Your body is working extra hard to get rid of the bacteria or various triggers that are bothering it! Keep the chain going and rest easy knowing your body truly is self-regulating.