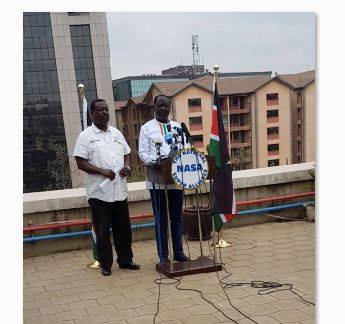 He further claimed that a series of meetings by commanders of the army formations had been held in Naivasha. The meetings, he said, were held at Lake Naivasha Lodge and the Great Rift Valley Lodge after the High Court ruled that presidential election results announced at the constituency level are final.

Military officers, he said, are being trained to man the polls as officials. “These trainings under way at the Embakasi Barracks have every semblance with what was done in the same venue in the lead-up to the 2007 General Election in which the APs were later dispersed as election officials and poll agents for Party of National Unity (Mwai Kibaki’s then party),” Mr Odinga said

“Jubilee appears to be putting all hopes on the old centralised tallying at the Bomas of Kenya that enabled them to doctor and change results,” Mr Odinga said at his Capitol Hill office.

“It is now turning to using intelligence officers to influence the August elections.”

Raila said this in the company of fellow NASA principal Musalia Mudavadi.