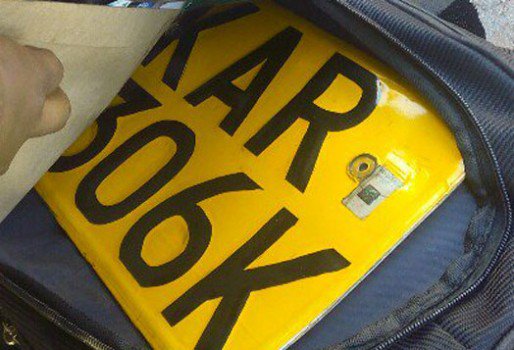 A man yesterday took off with the number plates of a matatu after the vehicle’s crew left him stranded on the highway.

Mr. Samuel Njuguna took with the registration number KAR 306 K. Apparently, he had boarded a matatu at Roasters. After traveling for a short while, just after he had handed over his fare, the matatu was stopped by a traffic cop. The conductor was arrested.

Mr. Njuguna was yet to get his change from the Sh. 1,000 he had handed the conductor.

The driver parked the vehicle near KCA University and alighted leaving the passengers stranded.

Mr. Njuguna alighted and went to the driver’s side and peeled of the insurance sticker. He scanned the vehicle and took out a spanner, which he used to take off the number plates. Then he took off.

On seeing this, the driver of the matatu pursued him and started to negotiate with him in a bid to calm him down. It was only after he got his full refund that Njuguna gave back the insurance sticker and the number plates.