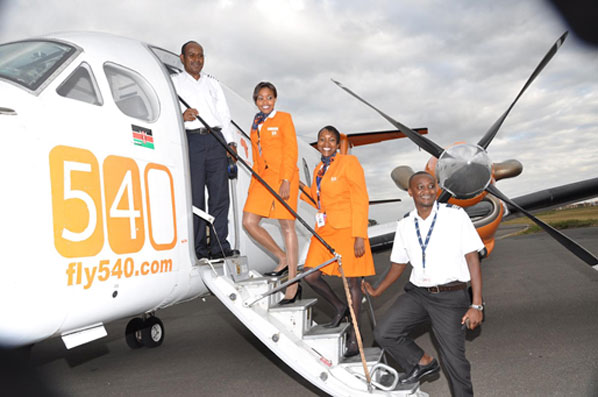 There was a security scare at the Manda Airport in Lamu county when a Fly540 plane bound for Nairobi got stuck in a pothole just as it was about to take off.

The pilot was preparing for take off when he noticed that one of the wheel tyres had been stuck in a huge hole on the run way.

He immediately switched off the plane as the 36 passengers scampered for their safety.

“The issue came just seconds as the plane started to lift its wings in readiness to fly. We saw the tyre on the left side stuck inside a huge hole on the runway. We thank God that the pilot acted swiftly and switched off the engine of the plane. It was a scary moment,” one of the passengers was quoted by Nation.

Airport staff were called in to dig and push the plane out of the dangerous hole before it took off safely – twenty four minutes behind its scheduled time.

“Engineers and airport staff had to be called and assisted in pushing the plane out and parked it at a safer location on the runway from where it was finally able to take-off safely,” an official at the Airport said.

Manda Airport, which is popular among tourists visiting Lamu, has been on the spot over its poor state that threatens the safety of passengers.

In 2017, Jambojet CEO Willem Hondius announced that his company had stopped flights between Nairobi and Lamu last week, citing the poor state of the  apron, taxiway and runway.