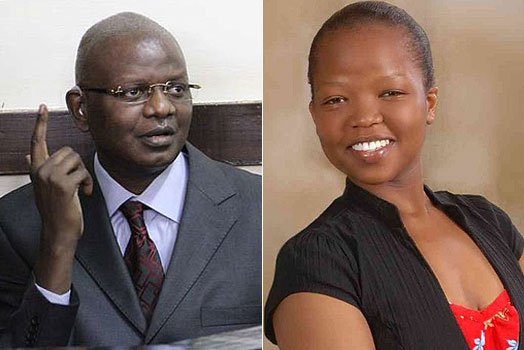 A document examiner on Wednesday confirmed that Ms Careen Chepchumba wrote a note whose pieces were found in a bin in her house.

Testifying at her inquest, Mr Michira Ndege also confirmed that Ms Chepchumba wrote a letter to her father, Mr Hosea Kili, barely two weeks before her death expressing remorse for having a relationship with a man against her parents’ advice.

The letter was written on February 6 2012, according to exhibits presented in court.

Ms Chepchumba was a close friend of former TV news anchor Louis Otieno and she had complained that he extorted huge sums of money from her.

“One of the documents I examined was a torn hand written note, a letter purportedly written by Careen to ‘dad’ and a hand written note on a letter head,” Mr Ndege, an assistant superintendent of police told the inquest.

Mr Ndege said the documents, together with five other notes, appeared to have been written by Ms Chepchumba.

“I was required to ascertain whether the handwriting on the exhibits were made by the same person with others submitted in the same exhibit memo form,” he said.

According to the witness, there were similarities in the hand writings an indication that they were made by the same person.

The torn note was written on February 12, 2012, the same day Careen attended a meeting at her father’s house that resolved to bail her from debts she allegedly incurred to finance Mr Otieno’s flashy lifestyle.

On Tuesday, the inquest heard that before her death, Careen had complained of having a fast heart beat that a doctor said was not life threatening.

Dr Charles Kariuki, a cardiologist, told a Kibera court that Careen visited his clinic at Nairobi hospital on October 7, 2011 complaining that her heart was beating rapidly.

A blood test revealed that she had an overactive thyroid and after a prescription given by the doctor, Careen did not return after a month for review.

She was found dead in her apartment at Kilimani’s Santonia Court on February 14 2012. The inquest will resume on October 21.