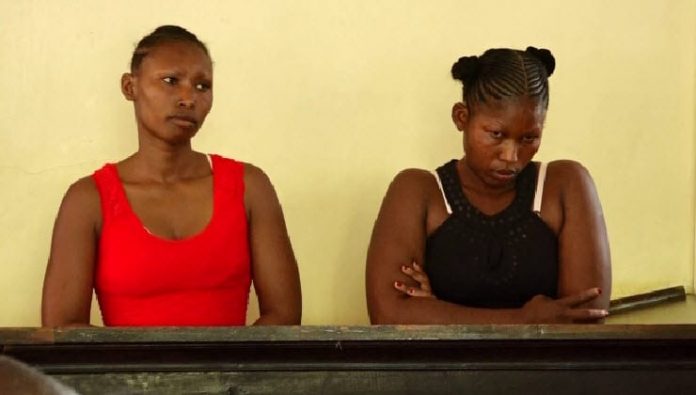 Two sisters were on Friday arraigned in court over the murder of their father in Embu.

In a strange turn on events, they pleaded guilty to manslaughter charges though they had earlier registered the not-guilty plea.

On October 16, 2019, the duo had entered a plea bargain that saw the murder charges revised down to manslaughter.

Their mother, Tabither Weruma, who is also their co-accused, however, maintained her plea of not guilty.

The court had earlier been told how the Embu man allegedly took money that had been raised by well-wishers for his son’s funeral and disappeared.

According to Tabither, her husband Zachary Kiura Mutindi returned home in Kathita village, Embu after three days without the money.

She told the court that when she inquired about it, an argument ensued.

It was then that she called her two daughters who live in Kathoge village, Kirinyaga.

She told them about what had happened and asked them to come home.

Tabitha apparently wanted her daughters to plead with their father for the Ksh. 5000 for their brother’s burial.

This was two days to the burial of the 19-year-old who died after a short illness.

According to court documents, the three reportedly assaulted their father on the night of September 7, 2019.

“We were deeply angered because we were still mourning our brother yet our father drunk away from the money,” one of them told the court.

Zachary Kiura Mutindi succumbed to his injuries on September 8, 2019 and his body was taken to the Embu Level Five mortuary.

Two days later, the postmortem results showed that Mutindi died from trauma to the head caused by a blunt object.

The father and the son who had died earlier were buried on the same day.

Following investigations, Emily, Esther and their mother Tabither were arrested on October 16, 2019 and charged with murder.

They pleaded not guilty and the court ordered that they are remanded at Embu GK prison and a mental assessment be carried out.

Plead for a custodial sentence

On Friday, the two pleaded for a custodial sentence saying that now that their father is dead and their mother is in jail, they are the only ones let to take care of the family.

Esther and Emily have two siblings: a brother (12 years old) and a sister (7 years old). Esther has three children while Emily has two.

They further told the court that they were remorseful for killing their father.

Justice Muchemi directed that the probation team furnish the court with a social behavior report to enable sentencing on December 16, 2019.

Their mother will take a plea afresh on the same day.

Team Editorial - June 3, 2020 0
It is the second rape case involving a police officer to be reported at Manyatta Police Station in 17 months A senior police officer is...

How to Help Teens Navigate the Disruption and Uncertainty of a...