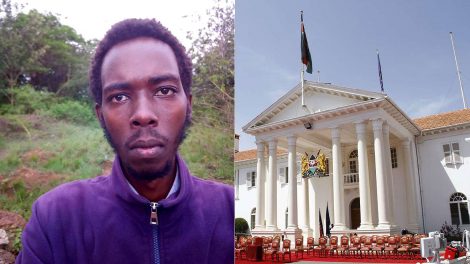 The DPP has withdrawn a case against a man who was shot after jumping over a State House fence, citing his mental condition.

Milimani chief magistrate Francis Andayi in November asked Brian Kibet’s family to engage the Director of Public Prosecutions to settle the matter out of court after it was established the suspect had schizophrenia.

“WE HAVE MEDICAL DOCUMENTS INDICATING THAT THE SUSPECT, BRIAN, IN THIS CASE, HAS A MANAGEABLE BUT PERMANENT AND INCURABLE CONDITION, SCHIZOPHRENIA,” THE DPP SAID.

As such, the suspect was declared unfit for trial because he requires constant medical attention.

The court directive two months ago came after Kibet’s father failed to present a recent medical report from Mathari Mental Referral Hospital to determine whether Kibet was fit for trial.

In July last year, the court allowed the Jomo Kenyatta University of Agriculture and Technology students of mechanical engineering to be treated for a mental disorder.

Andayi had directed that Kibet be remanded at Kilimani police station as his family made plans for his treatment.

“IF THE POLICE AGREE TO RELEASE HIM, THEN THIS COURT HAS NO PROBLEM. THIS IS A MATTER THAT REQUIRES FAMILY ASSISTANCE,” THE MAGISTRATE SAID.

The court gave the directions after finding the accused unfit to take a plea following an account of Kibet’s mental condition from his father.

“BRIAN WAS DIAGNOSED WITH A PSYCHOTIC DISORDER AFTER THREE ENCOUNTERS WHERE HE WALKED LONG DISTANCES WITH NO CAUSE,” HIS FATHER, KEVIN BERA, SAID.

Bera said his son once walked from about 6 pm to 2 pm.

“HE LEFT OUR HOME IN KITALE AND WALKED TO A PLACE KNOWN AS LORTUM IN WEST POKOT IN JANUARY LAST YEAR,” BERA SAID.

In February last year, Brian left JKUAT in Juja and walked over 100 kilometres to Mt Kenya and tried to climb the mountain illegally.

“HE WAS ARRESTED AND LOCKED UP AT NARO MORU POLICE STATION,” BERA SAID.

“WE LOCATED HIM AND TOOK HIM TO ELDORET WHERE HE WAS DIAGNOSED BY A PSYCHIATRIST WITH THE MENTAL DISORDER,” THE FATHER SAID.

Bera said after months of treatment, his son improved.