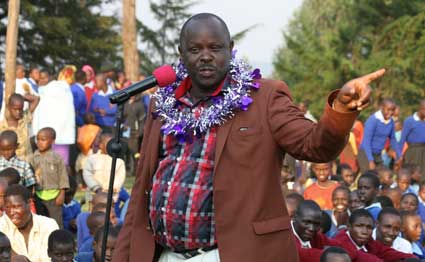 Rutto and Ng’eno asked the Deputy President to stop undermining leaders, especially in his Rift Valley backyard if he expected their support in 2022.

‘’I do not see the reason why the DP should keep on fighting us yet we have no problem with the Presidency, he should understand that we support them but we are not ready to join the Jubilee Party,’’ Rutto said.

The two were speaking at Kabolecho Girls Secondary in Trans Mara East Sub County, Narok County on Thursday during a fundraiser.

They said they fully supported President Uhuru Kenyatta and his deputy in their re-election bid in 2017 but asked them to allow leaders to vie for seats on the parties of their choice.

The Bomet Governor who later opened his Chama Cha Mashinani office in Murkan town said he will be moving across the 47 counties to popularise the party.

He said the main aim of his party is to ensure counties get more funds to serve Kenyans in a better way.

“We are not fielding a Presidential candidate in 2017, we want to ensure that leaders who support more funds to the 47 counties are elected, the Deputy President may in future need the support of our party, so he should stop fighting us,’’he said.

Ng’eno warned the Deputy President that he will be digging his own political grave if he does not desist from fighting elected leaders, especially in his Rift Valley.

“If God forbid governor Rutto and other leaders in the Rift Valley who are considered as rebels are rigged out of the 2017 general election, we will ensure that Deputy President William Ruto’s Presidential bid in 2022 flops,’’ Ng’eno said.