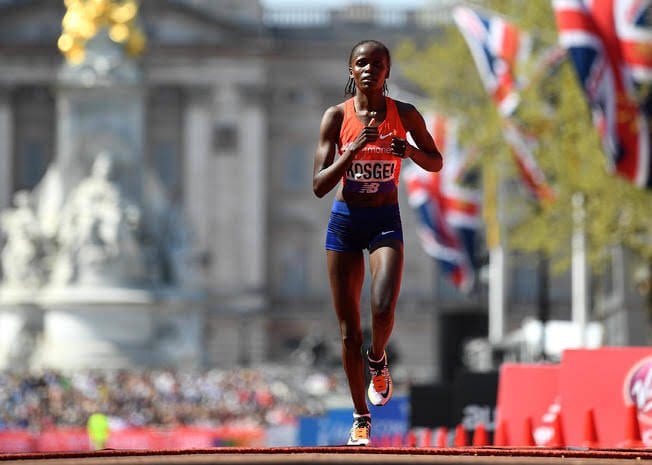 Lawrence Cherono won the men’s race in 2:05:45 to secure a Kenyan double with his compatriot Bedan Karoki coming fourth.

But the day belonged to Kosgei, who’s astonishing performance erased one minute and 21 seconds off the previous record of 2:15:25 set by Briton Paula Radcliffe in April 2003 at the London Marathon.

The athlete who trains in Kapsait, Elgeyo Marakwet County, is also the reigning London Marathon and has enjoyed a prolonged winning streak as she has finished first or second in nine of her ten careert marathons.

Kosgei set out at a blisteringly fast pace, covering the first five kilometres in 15:28.

Her pace dropped slightly after that initial enthusiasm but the 25-year-old settled into regular 16-minute splits for each five-kilometre segment.

The race thus turned out to be about Kosgei’s world record attempt and she showed no signs of fading in the closing stages even as the male pace makers peeled away before the final two miles as Kosgei forged on alone.

The 25 year old would cross the finish line in 2:14:04 as she shattered a 16-year old world record- the longest standing record in the modern era.