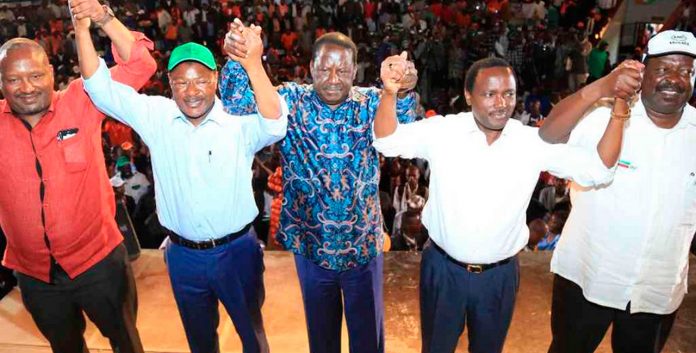 Emerging reports suggest that the opposition outfit is set to line up its 2013 team of Raila and Kalonzo.

According to sources at a secret meeting held on Tuesday night, experts tasked to come up with a presidential candidate came up with a Raila candidacy which will be deputized by Wiper Party leader Kalonzo Musyoka.

This was in a sharp contrast to earlier reports of a Mudavadi-Kalonzo team.

The final decision will however be made by the four principals, Raila, Kalonzo, Moses Wetang’ula and Musalia Mudavadi by consensus.

The NASA leaders are expected to publicly sign the historic agreement at a major political rally in Nairobi’s Uhuru Park grounds on the weekend of April 15-16.

The experts further recommended the creation of the position of a chief minister, equivalent to the powerful position of Prime Minister, which will be occupied by Musalia Mudavadi.

Moses Wetangula will take up the position of National Assembly Speaker.