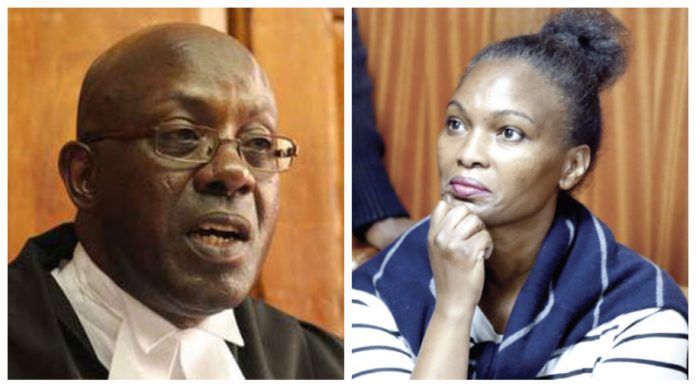 Leaked intimate texts allegedly exchanged between murder suspect Sarah Wairimu Cohen and Court of Appeal Judge Sankale ole Kantai has blown the lid on a relationship that was hidden from the eyes of the public.

Nation first ran the story on Friday, blowing the lid on a relationship that was kept away from the public even as investigations into the bizarre murder of Tob Cohen continued.

In its Saturday 22 Feb 2020 copy, the publication confirmed that the judge in question who exchanged steamy texts and even paid for Sarah Cohen’s flight to Kisumu was none other than Court of Appeal Judge Sankale ole Kantai.

He is reported to have paid for Sarah Cohen’s flight to Kisumu and the two met at Acacia Prime Hotel where they reportedly spent a night.

Their escapade was preceded by exchange of romantic texts, perhaps pointing to what the scheduled meeting was building up to.

Judge: Good morning. Driver left five minutes ago. He is coming for you.

Judge: Pack mosquito repellent if you have.

Upon arriving at Wilson Airport, Wairimu reportedly informed Kantai of her progress again.

Wairimu: Did you get medicated or shall I pick something en route once landed…We are boarding now.

Judge: I have a cough syrup and lozenges. There is no steam bath here.

Wairimu: Hi hun. I have checked in and now the long wait to boarding.

Judge: CU (see you) soon, (a kiss and the classic love heart emojis were added to spice the text).

The two would wine and dine in room 405 of the hotel where details of what transpired behind the closed doors remain scanty even as texts exchanged before the meeting leave little doubt on what happened as the two spent the night in the same room.

The judge would pay for her flight back to Nairobi and would go a step further to receive, proofread and correct her statement before it was filed by the police.

The judge was taken in on Friday for at DCI offices along Kiambu road with reports indicating that he spent the night at Muthaiga police station before being driven back to DCI on Saturday.