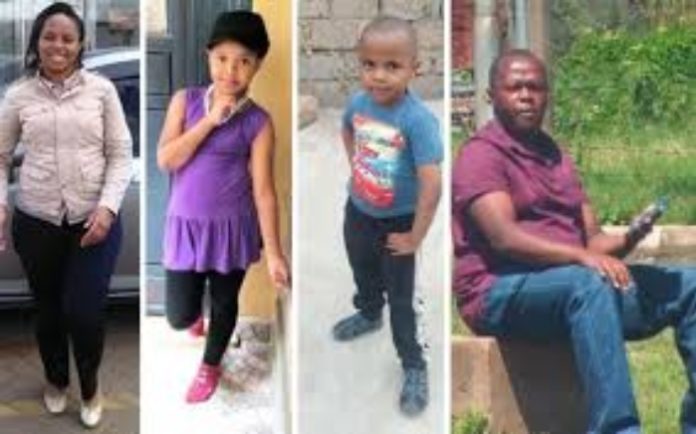 After Joyce Syombua rebuffed efforts by ex-KDF soldier Major Peter Mugure to be his second wife, he hatched a plan to ensure he doesn’t pay any more child support.

In a court account, at the High court in Nyeri, by a state witness, and Mugure’s co-accused, Collins Pamba, confessed how Syombua, 31, and her two children; Shanice Maua, 10 and Prince Michael, 5 were murdered.

Pamba said Mugure contacted him via his phone on October 26 telling him he had some assignment for him to carry out.

He said the accused asked him to take a boda boda and meet him at a hotel in Nanyuki Town where he told him the task he wanted to perform was at the military base. He would later join the accused at the base at around 10 pm.

Pamba according to the sworn affidavit met the accused at the parking bay beside his vehicle, a Subaru Imprezza.

He continued that the accused led him to his place of residence but instead opened an adjacent room to him and ordered him in.

“HE LED ME TO THE BATHROOM WHERE HE LIT HIS PHONE FLASHLIGHT AND I SAW SOME LUGGAGE IN A TRANSPARENT GUNNY BAG TIED WITH A ROPE,” HIS ACCOUNT READ.

“I could see it was a body of a human being facing down. I could see the hair was plaited and it appeared like it was a girl,” the statement read.

He continued that in the bathtub laid another luggage in a similar bag of what seemed like a baby boy who had a shaven head.

“I GOT SHOCKED AND MUGURE NOTED THAT I WAS. HE TOLD ME THIS WAS THE JOB HE WAS CALLING ME TO CARRY OUT,” THE AFFIDAVIT FURTHER READ.

Mugure according to Pamba’s account warned him not to disclose to anybody what he had seen lest he suffers the same fate even as the accused promised him to have him recruited in the military in the next intake.

“HE TOLD ME TO ASSIST HIM CARRY THE BODIES TO HIS CAR AT THE PARKING BAY. WE FIRST CARRIED THE BOY AND PLACE HIM IN THE BOOT OF HIS CAR AND THEN WENT BACK FOR THE GIRL,” THE STATEMENT CONTINUED.

After loading the two in the boot, Pamba recorded that he was further told to accompany him back but this time he opened his room and switched on the lights.

“I SAW A BODY OF AN ADULT FEMALE BEHIND THE CHAIR IN A WHITE TROUSER, RED SHIRT AND WITH FACE COVERED WITH A WHITE SHAWL. THE BODY WAS NOT IN A GUNNY BAG,” THE ACCOUNT READ.

He said the accused asked him to help put the body in a gunny bag which he did and then tied it with a nylon rope.

“THE BODY WAS HEAVY AND WE PUT IT DOWN SEVERALLY BEFORE PLACING IT IN THE BOOT OF THE CAR ON TOP OF THE CHILDREN AND THEN COVERING THEM WITH A MAT,” THE STATEMENT FURTHER CONTINUED.

He said they then drove off to a dumpsite on the outskirts of Nanyuki Town where a shallow grave had been dug.

It was while on the way that Pamba asked him why he had decided to kill the three and the accused said,

“HE TOLD ME THAT HE LOVED THE LADY AND WANTED TO MARRY HER AS A SECOND WIFE BUT SHE WAS NOT FAITHFUL AND ONLY WANTED HIM TO KEEP SPENDING MONEY ON HER AND HER CHILDREN,” READ PART OF THE ACCOUNT.

“HE TOLD ME THE LADY HAD TRIED TO INTERFERE WITH HIS FIRST WIFE WHILE SHE HAD NO PROBLEM WITH HER.”

They buried the three on top of each other.

Pamba as per his account was later dropped in town at around 1 am after accomplishing the task and asked to go to the officer’s place the following morning to clean his house and vehicle.

The matter will come up for hearing on March 3.