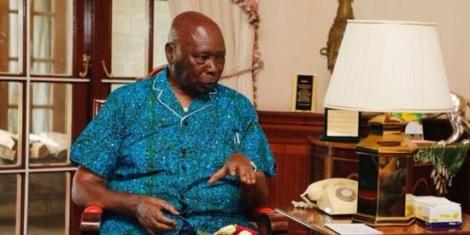 Moi, who will be honoured with a state funeral including full civilian and military honours, was Kenya’s second president after Mzee Jomo Kenyatta and ruled for 24 years between 1978 and 2002.

Kinyua disclosed that President Uhuru Kenyatta, currently in Washington, D.C. for bilateral talks with his United States counterpart Donald Trump, would lead the country in mourning Moi from Saturday, February 8.

Moi’s body will be transported from Lee Funeral Home to lie in state at Parliament Buildings on Saturday, February 8.

President Kenyatta will lead the country in viewing the body in a ceremony scheduled to begin at 10:15 a.m. on February 8.

State officials were asked to arrive at Parliament by 9:45 a.m. for the solemn ceremony.

Viewing of the body at Parliament Buildings will be open to members of the public from Saturday, February 8 to Monday, February 10.

The public will be allowed access to view the body from 8 a.m. to 5 p.m. on the aforementioned dates.

Moi’s body will be draped in the Kenyan flag and transported in a gun carriage to Nyayo Stadium on Tuesday, February 11.

A guard of honour will also be mounted on Parliament Road by military officers for the former Commander-in-Chief.

The national memorial service to be held at Nyayo Stadium will be an interdenominational Christian service.

Clergy from various churches in the country will preside over the service.

Kinyua disclosed that they had received messages of condolence from around the world, stating that a full list of international attendees at the service would be announced in due course.

He further noted that condolence books were open at the Office of the President at Harambee House and county commissioners’ offices around the country for all who wished to share their messages of condolences with the late president’s family.

Kinyua further stated that the events at Nyayo Stadium would be broadcast live by all national television and radio stations for Kenyans around the country to follow.

The late president will be interred at his farm in Kabarak, Nakuru County on Wednesday, February 12.

Being a state funeral, the ceremony will be characterized by special military procedures in Moi’s honour.

As a former Commander-in-Chief, Moi will receive a three-volley salute.

Another gun salute will be fired after his body is lowered into the grave.

Members of the firing party will point their guns above the late Moi’s casket and fire a gun salute ranging between 13 and 22 rounds of ammunition.