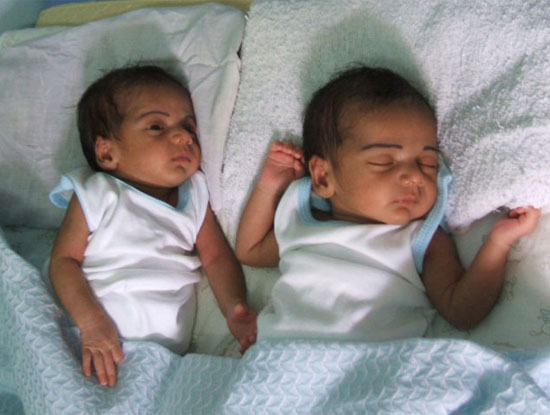 Twins should be delivered at 37 weeks, short of full term but not too short, for the best chance at survival, said a study Wednesday that analysed over 35,000 births.

The evidence however did not support routine delivery before 36 weeks from the date of fertilisation, said research published in The BMJ medical journal.

Current recommendations for twin births vary from 34 to 39 weeks, short of the normal 40 weeks of gestation, to lower the risk of still birth.

But premature delivery is associated with health complications for the children, making it a tough balance to strike.

For the new analysis, an international research team looked at 32 studies published in the past 10 years of women with uncomplicated twin pregnancies whose children died at birth or shortly thereafter.

They weighed data from 35,171 pregnancies to try to identify the optimal gestational age for twin delivery.

Of the pregnancies, 29,685 were dichorionic, meaning each twin had its own individual placenta, and 5,486 monochorionic, sharing a single placenta.

Scientists had previously observed a thirteenfold increase in stillbirths in monochorionic twins compared to single child pregnancies, and five-fold in dichorionic ones.

In duo-placenta pregnancies, the risk of stillbirth and neonatal death did not change until 37 weeks, the team found.

“However, delay in delivery by a week (to 38 weeks) led to an additional 8.8 deaths per 1,000 due to an increase in stillbirth,” said a statement on the study.

In the smaller group of single-placenta twins the evidence was less clear, the researchers said, but there was nothing to support routine delivery before 36 weeks.

“Our estimates… should be taken into account when decisions are made on timing of delivery,” the team concluded.