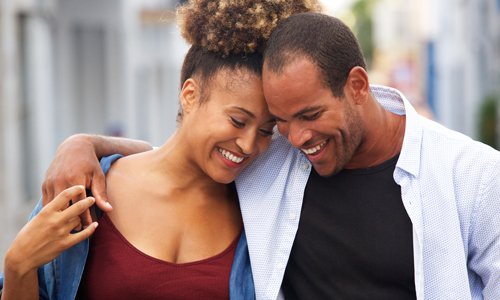 I’ve discovered in my romantic life that there are two very different kinds of love, and even though they often coexist and overlap, that’s not by any means always the case.

One is the most lovely feeling –the kind that we can have when we are in a gorgeous place, looking at Inspiring art, listening to powerful music, or being with somebody that we feel good with and who makes us feel good about ourselves. It’s a deeply pleasurable experience, and like all pleasures, it is essentially quite selfish. It makes us feel inspired, full of appreciation for the world and our place in it, suffused with well-being. It’s the kind of Love which is often celebrated in love songs and romantic films or stories.

It’s a wonderful feeling, but it isn’t enough of a foundation for a relationship. That needs another kind of love – the kind that is a deep commitment to wanting to know, connect with, support, and be a part of another person’s world – their feelings and values. The kind of love that accepts appreciates and adapts to another person’s reality in a way that is passionately validating for both, and that is resilient enough to encompass the kind of conflicts and misunderstandings that will inevitably surface when two people connect in a deep way.

Both kinds of love are positive experiences, but I’ve learned that if I want to build a long-term intimate connection with anyone, it’s important for them not to be confused.

Often, a relationship starts with more of the first kind of love– turbo-charged with sexual attraction and the novelty of being close to someone new. But this feeling will definitely wear off as familiarity inevitably begins to set in (six months is generally given as the average time this process takes, although I’ve found it can be much shorter, or longer, than that) and it’s at this point that it’s necessary to evolve into the second more selfless and mature kind of love if the relationship is to grow and to avoid feelings of disappointment and disillusionment.

Tragically, it is during this transition phase, when things are poised to become more meaningful and rewarding for both, that many couples split up. Possibly they have found out things they don’t much like about each other, or for whatever reason have recognized there is simply just not enough compatibility to make the relationship work, or some other reason why splitting is definitely the best thing for one or both of them.

But tragically there are also countless relationships which would have had the potential to become rich and deep and to be everything that could be expected from a deep and lasting love, but never get to that stage because of a lack of understanding about this inevitable transition phase. And on reflection, I can see that I’ve made this mistake myself several times.

In my own experience, a series of relationships were begun and then abandoned as the romantic/dream phase ended and the reality stage set in – mainly because of a lack of trust or self-esteem so that as the rose-tinted spectacles come off there was a fear that there wouldn’t be enough mutual attraction and respect to sustain a deeper kind of connection, and my powerful instinct was to run away. To quit before I was fired!

I can see now that this was the equivalent of only ever eating starters in a restaurant and never getting to the delicious main course – perhaps because of a lack of understanding that the menu had to be turned over to see what was on the other side, or not having the patience for the feast to be cooked and served.

But if both partners understand that the initial romantic phase is ideally just the first step in a longer and more rewarding process, any unnecessary feelings of disappointment can be avoided. As I finally discovered in my own life, it’s worth developing the self-belief, trust, and patience (and getting professional help if there seems to be a shortfall in any of those areas) so that the real nutrition of a deeper kind of love can be fully experienced. Oh, and this way you get to eat dessert too!