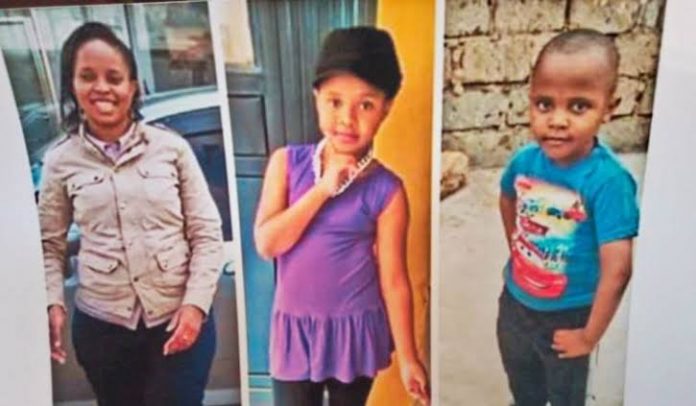 It is now 19 days since 31-year-old Joyce Syombua and her two children; Shanice Maua and Prince Michael, disappeared after visiting her estranged partner Major Peter Mugure in Nanyuki.

Police are awaiting call log details from Syombua’s phone before announcing the next step of the investigation.

On October 25, 2019, the woman and her two children made their way to Nanyuki in a public service vehicle (PSV). Joyce was taking her children to meet their father and he was supposed to pick them at the Nanyuki main stage.

In his statement to the Directorate of Criminal Investigations (DCI), Major Peter Mugure of the Laikipia Airbase states that he picked his partner and two children from the Nanyuki main stage and they all spent the night at the Airbase.

On Saturday, October 25, a friend of Joyce — Farizana Syombua — inquired about their visit to Nanyuki and Joyce told her via SMS that they had woken up well and were taking breakfast at about 9:30 am.

Two hours later, Joyce messaged Farizana to inform her that when she went to freshen up, she returned to find that her husband had allegedly taken the children on a tour of the base.

In his statement, Maj. Mugure does not mention much of what happened that morning but indicates that at some point Joyce called a friend of hers from Timau to come to take their children away so that they can iron out some domestic issues.

A court had ordered the major to pay maintenance costs for his children after DNA tests had been carried out to prove their link.

“The husband was not on good terms with the wife for some time,” says Nanyuki DCI boss Jacob Mureithi.

It is alleged that they remained at the base until 3 pm before proceeding to Kirimara Springs Hotel where they enjoyed late lunch and possibly a family night out.

But what happened next is the mystery.

Maj. Mugure says he received information from the Laikipia Airbase that he was urgently required to handle an emergency so he canceled the family night-out and escorted his wife to the Nanyuki main stage for a trip back to Nairobi.

Their children met them at the stage and he bid them farewell there as they boarded a vehicle. That is the last time he claimed to have seen his family.

But according to Joyce’s friend Farizana in her statement to the DCI, Maj. Mugure never returned with the children after he allegedly took them for a tour of the airbase in the morning.

Farizana eventually tried to reach Joyce on her phone all of Saturday night and Sunday morning to no avail.

Joyce’s phone was discovered on Sunday at 3 pm in a matatu belonging to 4NTE Sacco in Nanyuki. The vehicle had just returned from a trip to Nyahururu.

Police are hoping that phone call logs and GPS tracking will shed light on the movements of the missing three.

Some of the unanswered questions include who is this mysterious lady who Maj. Mugure claims took his children for the better part of the day, what emergency prompted the major to cancel the evening plans and how did Joyce’s phone end up in a public service vehicle headed in a completely different direction from Nairobi.

Family members continue urging the police to fast-track their investigation and find out where their missing loved ones are.

Maj. Mugure refused to speak to Citizen TV on phone and instead directed us to the Kenya Defence Forces (KDF) communications office.