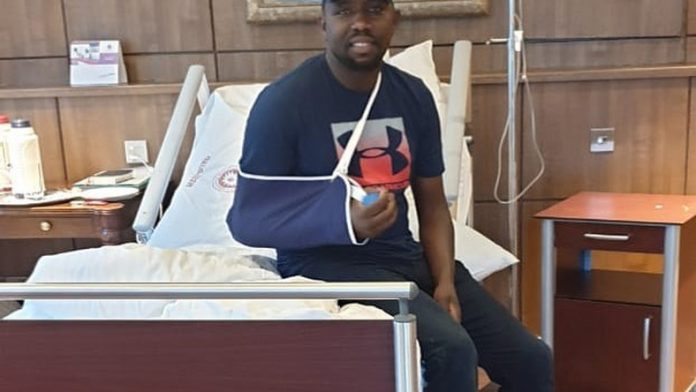 Elgeyo Marakwet Senator Kipchumba Murkomen has spoken up on the injury he sustained after a video of him writhing in pain was shared widely on social media.

The Senate Majority Leader suffered the injury during a friendly football match between the Senate and the Kitui County Assembly at Ithookwe showground in Kitui last week.

In the viral video that was released on Monday, the legislator is seen crying “Usinishike Usinishike” while cautioning his teammates not to touch his injured shoulder. Taking to Twitter, Murkomen said his collarbone fractured and was nearly protruding hence the loud cry. He also told netizens not to share the video with him.

“Last week I fell & tore my Coracoclavicular ligament during soccer game. Even in my pain & having realized my collarbone was nearly protruding, I managed to protect self from the dangers of poor 1st Aid. I got to Hospital, Surgery done & now I’m fine. Don’t share video with me enjoy if you must,” he tweeted.

Murkomen added that he had to undergo surgery to reconstruct his coracoclavicular ligament.

“After suffering an injury while playing football in Kitui on Monday I underwent a procedure on Tuesday to reconstruct my coracoclavicular ligament. I thank Prof. Ating’a for a job well done together with Dr.Wanyoike & Dr.Arunga plus the rest of the medical team. I have been discharged and will continue with the recovery process. I received amazing support from my wife, parents, siblings, in-laws, friends and colleagues. Thank you for the visits, prayers, calls, messages of encouragement and well wishes,” wrote Murkomen.