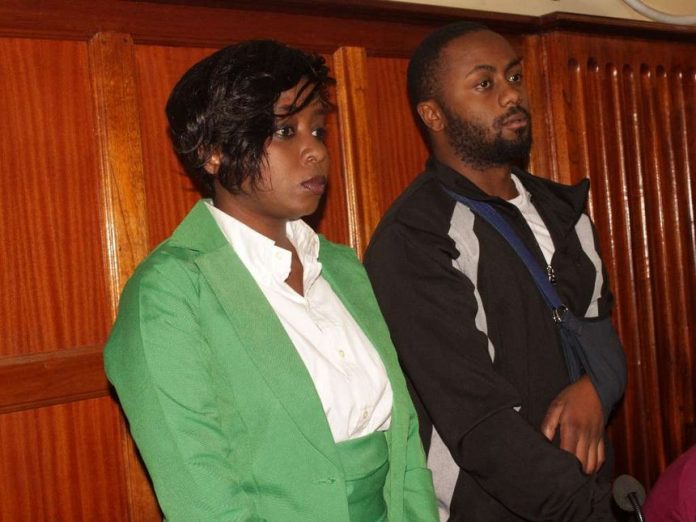 BY THE STAR: Maribe and Jowie Murder Case: ‘I love you and I am sorry’. These were the words Joseph Irungu aka Jowie repeatedly told Jacque Maribe after visiting her apartment on September 19.

In her statement to the DCI, Maribe said her fiance came back home on the said day crying and apologised for what she did not know. The two are the prime suspects in the murder of businesswoman Monica Kimani.

The latter was found dead in her apartment on September 21. They denied the charge before Justice Jessie Lessit on Monday and are expected in court on Wednesday for further directions on their case.

Maribe said: “I had gone to bed by the time he returned. He came to my room crying and telling me he was sorry.”

“I told him my child was sleeping and that he should stop making noise lest he woke the child from sleep. He kept crying that ‘Jacque I am sorry’, but I ignored him.”

After some minutes, Maribe stated that Jowie walked to a closet in her house after which she heard a gunshot.

“I jumped out of bed and went to the closet, and found him lying on the floor. Blood was oozing from his upper left chest area,” she said.

She added that Jowie kept on apologising to her sending her into a panic mode.
“He was repeatedly saying ‘I love you. I am sorry.’ I panicked and ran back into my bedroom for my phone,” she said.
Maribe said by the time she came back, Jowie was gone.

“I left the house and ran outside towards Brian Kassaine’s house where I found him lying down.”

Brian is Maribe’s neighbour. He was released on a free bond but ordered to report to the DCI every Thursday.
“Brian’s wife Cate also ran outside to where Joseph was lying. He was still bleeding from the chest,” Jacque told the detectives.

On Monday, Jowie, burst into tears after his mother hugged him in court before his murder charge was read out. Jowie has been in custody for a month. He and his fiance Maribe were charged with killing Monica Kimani.

Another man who had been detained in connection with the killing was released.
Brian Kassaine is now a prosecution witness. He is said to have helped detectives to piece together the events of the night the crime was committed.