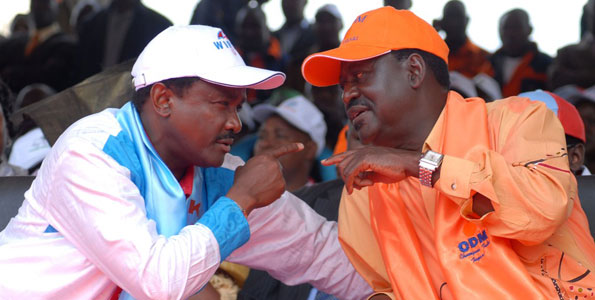 Wiper party leader and former vice-president Kalonzo Musyoka has said that he will not back Raila if he sees that the ODM leader will lose the upcoming general elections.

“If we are going to end the same way we did then he cannot be the flag bearer,” said Kalonzo.

Mr. Musyoka said this while speaking with Kenyan newspaper The Standard. Mr. Musyoka further added that there was no time for CORD to hold competitive nominations to get its presidential candidate.

“We do not have time for competitive nomination because that would create animosity and we know ourselves. I think we will have to agree, agree or disagree, that’s a hard fact,” he told the newspaper.

Mr. Musyoka appeared to disagree with the ODM side in the CORD coalition which has been pushing for the most popular candidate and party to be assumed as the 2017 presidential candidate. “We could have Kalonzo running and Raila supporting or Wetang’ula running and Kalonzo supporting,” he said.

Last week, the Wiper leader accused Machakos Senator Johnstone Muthama of betraying the Wiper party by pushing for Raila to be CORD’s presidential candidate in cahoot with Senator James Orengo.

Mombasa Politician Billionaire In Tussle With Wife Over 3 Billion Property

My Near Death Experience, Cyrus Oguna