How Joyce Omondi And Wahiga Mwaura Kept Their Relationship Under Wraps, Before Marriage 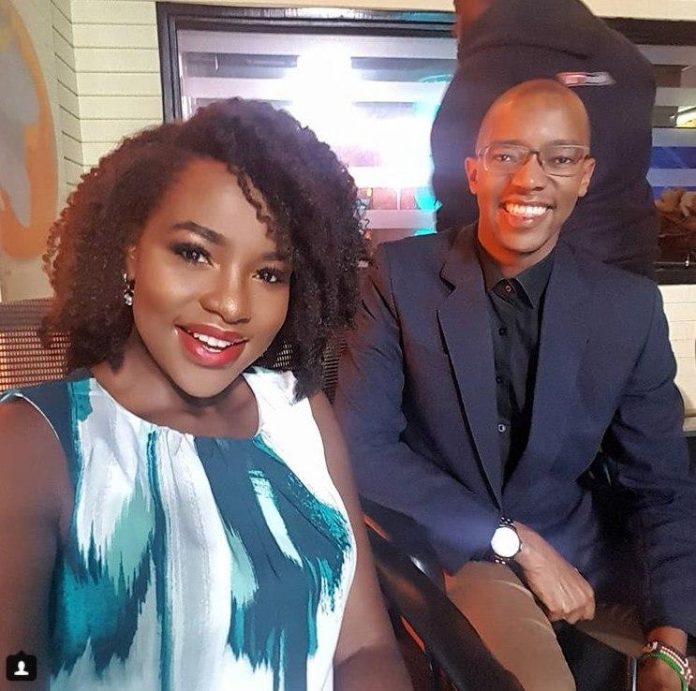 Fans always scramble to get as much information about media power couple Waihiga Mwaura and his wife Joyce Omondi. This is more so because the two keep their private life very close to their chests.

Little is known about their lovey dovey side.

That is why, despite being in the limelight, they managed to keep their relationship under wraps until a few days to their wedding.

The lovebirds started dating while they were both working for Citizen TV; Waihiga as a sports news anchor and Joyce Omondi as host of gospel show Rauka.

In a recent and rare interview with Salon Magazine, the couple revealed why they kept their relationship secret.

“WE KEEP TO OURSELVES AND RARELY POST ABOUT EACH OTHER APART FROM SPECIAL OCCASIONS. ANYTHING PRECIOUS IS BEST KEPT HIDDEN AND THAT HAS BEEN OUR POLICY,” SAID THE COUPLE.

Waihiga and Omondi further revealed that some of their colleagues didn’t know they were dating until they tied the knot.

“WE DECIDED TO BE VERY PRIVATE ABOUT OUR RELATIONSHIP FROM THE BEGINNING. MANY PEOPLE [INCLUDING OUR COLLEAGUES] DID NOT KNOW THAT WE WERE DATING UNTIL WE GOT MARRIED,” SAID THE COUPLE, ADDING, “THAT IS WHY THIS IS THE FIRST AND ONLY INTERVIEW WE SHALL DO IN A VERY LONG TIME.”

They told the magazine that they met in 2012 on a Sunday morning when Joyce was leaving the set of her show. Waihiga pursued the gospel musician for a while but she was hesitant to get into a relationship with him. She eventually gave in and they started dating secretly, leading to their wedding on December 18th, 2015 at Sawela Lodge in Naivasha.

In a different interview with Chat Spot, Joyce stated that she had been missing from TV for six years and her new show will give her an opportunity to interact with young people.

“IT’S BEEN 6 YEARS SINCE I GOT BACK ON AIR AND THE SHOW I’M DOING REALLY IS A DREAM. BECAUSE I’VE BEEN LOOKING AT HOW I CAN HAVE A PLATFORM TO TALK WITH YOUNG PEOPLE. TO DO ALL THESE OTHER LIGHT FUN THINGS BUT STILL INFUSE MY FAITH AND THIS SHOW I AM DOING, IS IT.”

During the period she was away, she pursued her Masters Degree and many opportunities came along but she believes that not every opportunity is the right one.

“THERE HAVE BEEN OPPORTUNITIES THAT HAVE COME ALONG BUT I PERSONALLY BELIEVE THAT IT’S VERY IMPORTANT TO UNDERSTAND THAT NOT EVERY OPPORTUNITY IS THE RIGHT ONE. AND IT’S WISDOM, IT IS DISCIPLINE AND IT’S SELF-LOVE AND VALUE TO KNOW WHICH OPPORTUNITIES YOU SHOULD TAKE AND WHICH ONES YOU SHOULD LEAVE BEHIND.”

Sourcempasho
Share
Facebook
Twitter
Telegram
WhatsApp
Linkedin
Previous articleI Hate My Job And People I Work With
Next articleSorry, No Holiday On The 26th Statehouse Clarifies