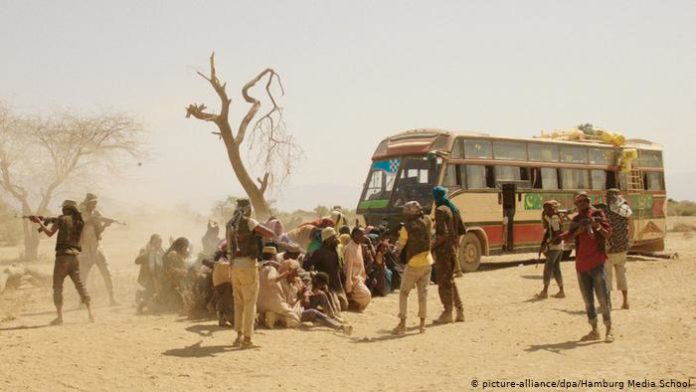 Three people were killed after al Shabaab attacked a bus in Sarmani, Mandera County on Wednesday.

Five other passengers sustained injuries as scores fled the scene in fear for their lives.

The bus belonging to Moyale Raha company was from Mandera headed to Nairobi when the insurgents attacked.

The bus driver is among those who were injured.

al Shabaab has stepped up the pace of its attacks in Kenya since the New Year.

In January, three Americans were killed by al Shabaab during an attack on a military base in Manda, Lamu.

They include one U.S. military service member and two contractors; two other Americans who work for the U.S. Department of Defense were injured.

The Pentagon declined to provide further details on the attack.

However, a few days later, the U.S. military deployed additional forces (about 50 troops) to Kenya to bolster security at the Manda airfield.

During the same month, 4 school children were killed in a gunfight between police and al Shabaab militants who attacked a telecommunications mast.

According to Mohamed Dubow Aden, Garissa County’s Red Cross coordinator, three of the dead children were from one family.

He said the attackers also wounded three other children.

Earlier this month, two road construction vehicles were burnt following an attack by suspected Al Shabaab militants at Milihoi on the Lamu-Garsen road.