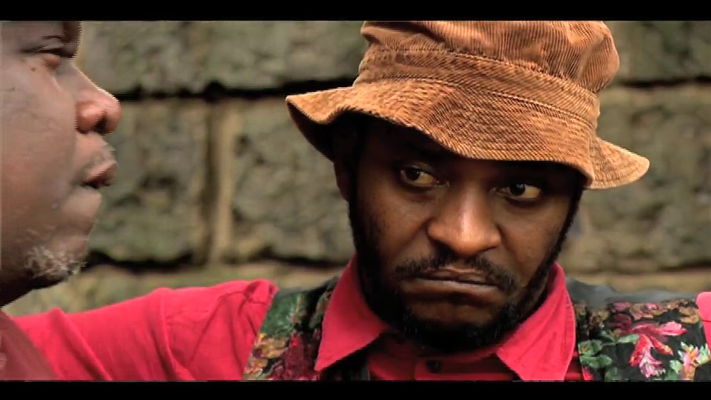 Kenneth Gichoya, alias Njoro from the popular show ‘Papa Shirandula’, says he hawked sweets to get his daily bread.

Speaking on Churchill Show ‘Journey Series’ edition, the comedian said he preferred hawking the sweets more than having the main role in a play.

“I DID NOT WANT TO ACT BUT ALWAYS WANTED TO REMAIN BACKSTAGE TO DO MY BUSINESS,” HE SAID.

Njoro recounted that he used to earn Sh300 from each show but with sweets, he would make 10 times more.

He said he made sure he got the extra role so he could remain in the audience. “Like a role that didn’t need much of my time. After finishing the short role, I would go and hawk my sweets,” he said.

“THE GOOD THING IS THAT EVEN WHEN I WAS SELLING SWEETS, THE FUNNY CHARACTER IN ME ALWAYS CAME OUT, AND I WAS STILL THE FUNNY GUY TO THE SCHOOL GIRLS AND BOYS. THEY WOULD MISS YULE ‘JAMAA WA SWEET’.”

Njoro started his acting career by doing set books. Through his sweet business, he saved enough to cater to his wife’s maternity fees for their secondborn daughter.

“I WOULD BUY A PACKET OF SWEETS AT SH75 AND IT WOULD GIVE ME A PROFIT OF SH250. SO, I JUST NEEDED TO LEAVE MY HOUSE WITH A HUNDRED BOB. I WOULD RUN TO KIRINYAGA ROAD AND GET ONE PACKET AND BY THE END OF THE DAY, I WOULD END UP SELLING LIKE 10 PACKETS.”

“That is how I managed to buy my secondborn child diapers and all the mother needed.”

His secondborn daughter is in form four. Apart from being in entertainment, Njoro is in the business industry. He runs an entertainment joint, hardware and is in the matatu business.

“I HAVE DELEGATED SOME BUSINESSES TO MY WIFE SO SHE CAN ALSO HAVE SOMETHING TO DO.”

HIS ADVICE TO FELLOW COMEDIANS AND ARTISTES IS “JUST LIVE YOUR LIFE AND YOU WILL BE BLESSED FROM THERE. YOU LIVE FLASHY LIFESTYLES WHEN YOU ARE IN FAME AND WHEN YOU GET INTO PROBLEMS, YOU END UP NOT HAVING SOMEONE TO TALK TO.”

The father of three says most young people are ending up in depression after realizing they wasted a lot of their time showing off.

“I HAVE LEARNT TO LOVE INVESTMENT. I HAVE ALWAYS ENCOURAGED OTHER THESPIANS TO HAVE A SIDE HUSTLE SO IN CASE THIS FAILS, YOU WILL HAVE A FALLBACK PLAN ON THE OTHER SIDE.”