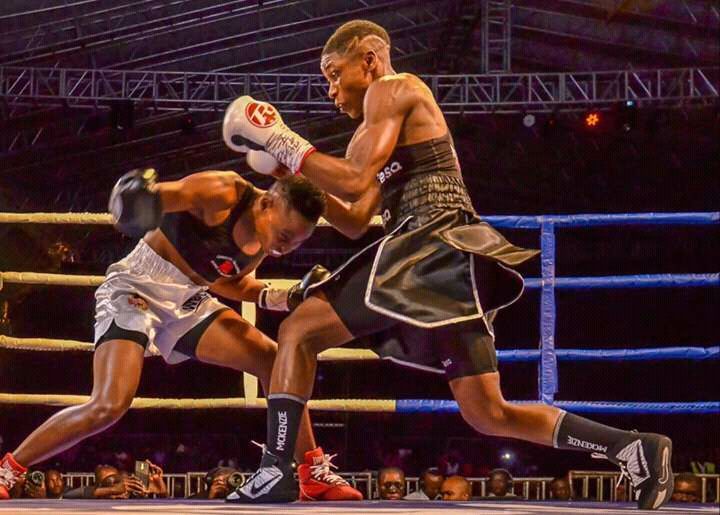 Winner between Zarika and Phiri has made Kenyans to express mixed reactions on social media after closely monitoring a fight between Kenyan based world boxing council WBC super Bantamweight champion Fatuma Zarika and her challenger Zambian Catherine Phiri last night at KICC in Nairobi.

According to Kenyans Zambian Catherine Phiri won the match but failed to collect enough points to crown her as a winner. Phiri gave Zarika a run for her money and showed a lot of improvement from the last fight to Zarika at carnivore in December 2017.

It was a moment to recall with Conjestina Achieng watching the fight. Zarika had to wait for a unanimous decision from the judges.

After a heavily contested fight KICC was sent into a celebration when a bench of three judges made a unanimous decision to award Zarika a win of 98-92, 99-91, and 97-93 respectively.

Last night fight was a repeat of December 2, 2017 in Carnivore Nairobi where Zarika easily won the fight. Yesterday zarika was given hard task fighting against a familiar side.

Zarika who is 39 years now, has been enjoying a good spell of victory after the December 2017 fight with Phiri, in September last year won a fight between her and Mexican Yemileth Mercado Ina split point decision.

Elsewhere, Kenya Harambee stars failed to impress in Ghana after it was beaten one nil. Caleb Ekuban stepped off the bench in last minutes of the game to score for Ghana. The two sides have booked a slot in Cameroon in these years competitions. The panthers of Gabon failed to qualify for AFCON after a 1-1 draw with Burundi in Bujumbura.