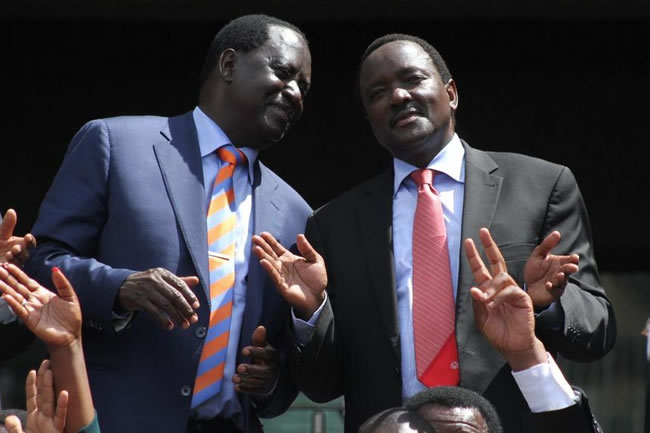 Details of how NASA is planning to share power to defeat Jubilee in the upcoming general elections are beginning to emerge.

According to Kenya’s Standard Newspaper which is privy to the on-goings at the CORD coalition and the opposition’s attempts to form a unified front, the 2013 line up of Raila and Kalonzo may be retained.

However, the line-up will be expanded to create additional positions such as two vice presidents, a prime minister and two deputies.

Besides the sharing out of new positions, the seats of the two speakers have been factored in and will be given to Western, Kisii and Mt Kenya regions. Coast too, will be accommodated in the proposed line-up.

According to insiders, once the elections are held, a referendum will be held within 90 days to create the new positions, which will then be filled. Highly-placed sources at Capitol Hill where the meeting took place, who spoke on condition of anonymity, said Raila and Kalonzo agreed that they would unveil a presidential candidate next year.

The strategy, according to Kalonzo, is to bring in political heavyweights like Amani leader Musalia Mudavadi and others in the expanded Opposition team. “Mr Odinga only briefed me on the idea behind Nasa and the proposed structure. We agreed that we shall continue holding discussions to fine-tune Nasa and the structures,” said Kalonzo.