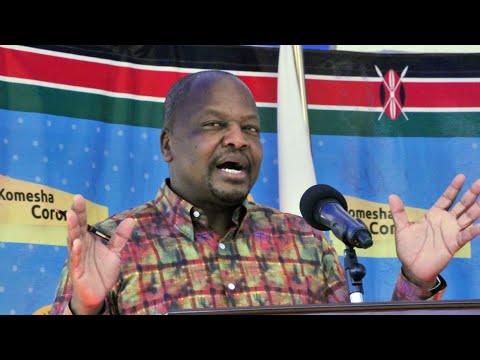 Ministry of Health Cabinet Secretary Mutahi Kagwe has sounded warning over the rising cases of the novel coronavirus in the country, asking Kenyans to brace themselves for tougher times ahead.

Speaking to the media during a briefing at the Afya House on Sunday, CS Kagwe revealed that the Ministry of Health’s case modeling team said the rising infections are the harbinger of a second wave.

He attributed the rising cases to the return of normalcy following a relaxation of restrictions erstwhile imposed to avert the spread of the virus.

He noted that social joints especially bars have flouted guidelines by MoH especially on face masks and social distancing.

“The spike we are witnessing has not erupted from nowhere, it’s because of defiance. Bars are not maintaining social distancing, wearing of masks, I plead with you to follow the measures so that the measures are not escalated,” he said.

“What happens when you go to the pub, get infected then infect your children who are now back to school, think about it, they will, in turn, infect other pupils, and they will infect others, the story can unfold,”

During the briefing, CS Kagwe said nearly 1,000 patients have been admitted to various hospitals since September 28 when a raft of new measures were announced.

The number does not include patients who are recovering under the Home-based care.

At the same time, CS Kagwe noted that there is a worrying rise in ICU admissions, saying that there are 28 coronavirus-related admissions across the country currently.

CS Kagwe now wants politicians, leaders, and business people who are organizing events that attract crowds to adhere to rules issued by MoH.

He noted that politicians were sending the wrong signals by holding meetings where attendees mingled freely without face masks or respect to social distancing.

On Sunday, the Ministry of Health announced 685 new infections; during the briefing, CS Kagwe said the cases indicated a 13% positivity rate compared to the 4% positivity rate on October 3.