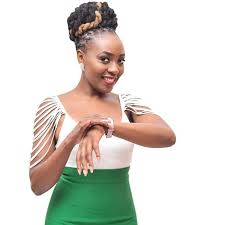 Kenyan actress Nyce Wanjeri seems to have found love once again after a nasty breakup from her baby daddy Timo Wagithomo.

Speaking about the break up during an interview with Masawe Japanni, Nyce Wanjeri said there had been disrespect in their marriage.

When it became too much she chose to walk away.

I AM VERY SPIRITUAL.

Well as the world celebrated Valentine’s day she took to her social media to flaunt her new bae with the caption.

We did a little digging and in a post dated September 2018 Leting had met Nyce Wanjeri at Tafaria Castles.

Taking to his social media at the time he wrote

‘ABOUT YESTERDAY AT TAFARIA CASTLE:

I MET @NYCEWANJERI , A CELEBRATED KENYAN ACTRESS THAT FEATURED PROMINENTLY ON OUR SCREENS THROUGH THE PROGRAM AUNTIE BOSS…

MY EXPERIENCE WITH HER LAY A SIMPLE FACT BARE ON MY PALMS. THAT NOBODY MAKES IT BY MISTAKE. YOU GOT TO WORK AND GRIND.

THE AMOUNT OF POSITIVE VIBES AND AGGRESSIVENESS IN THIS LADY IS JUST UNMATCHED.
#GODBLESSYOUSHIRO.’

In a recent Insta story update, she penned about how she now looks forward to going home and our guess is that love has everything to do with it.

‘ HAYA TWENDE NYUMBANI SASA…. THERE WERE TIMES I DID NOT WANT TO GO HOME EVER. BUT NOW I RUN HOME, IT’S MY HAPPY PLACE.’

We are happy that Nyce Wanjeri has found love again and below are photos of the lucky guy.