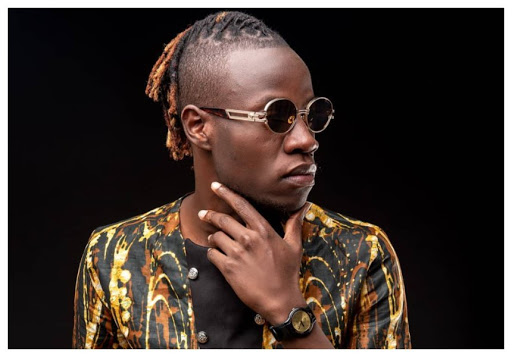 Life for Guardian Angel has not been easy. His dad rejected him, he lived in the street and most times he could not make the rent.

When he finished school his mother told him he is now on his own.

“MUM TOLD ME, ‘NOW GO AND START YOUR LIFE. YOU ARE NOW OLD ENOUGH’.”

Guardian got a job an Industrial area for a company that was extracting old telephone cables from the ground because they are not being used anymore.

“BASED ON THE LENGTH OF THE CABLES YOU GET AFTER A DAY OF DIGGING IS WHAT YOU GET PAID FOR. IF YOU DON’T GET CABLES, YOU DON’T GET PAID.”

A week after hustling in the job, he had an accident after hitting an electric cable and suffering burns from the impact. At the end of that day, he was paid Ksh 200, only for his effort.

After that, he considered quitting the job. As luck would have it, he met video producers, Pancakes Musik, who shot his first music video.

“AFTER THE BURN ACCIDENT I CALLED HIM. WHEN WE MET HE LOOKED AT ME AND ASKED, ‘BRO, MBONA UNATESEKA HIVI NA VILE UKO TALENTED?’ BECAUSE HE HAD HEARD MY MUSIC. I TOLD HIM MY MUM HAD TOLD ME TO GO HUSTLE AND MAKE A LIFE FOR MYSELF. THEY TOLD ME TO COME LIVE WITH US THEN. “

He narrated how he was a houseboy for a whole year, he washed, cleaned, and cooked.

They shot his music video Amazing grace that propelled him to fame.

Check out the song below.