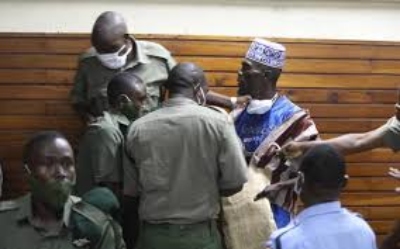 A man accused of sodomising a three and half-year-old boy on Wednesday turned violent in court and attempted to attack the magistrate.

Ismael Mustafa for the second time turned violent and attempted to attack Chief Magistrate Edna Nyaloti prompting her to run out of the court.

He had previously, in early September 2020, charged towards the magistrate while she was busy writing down proceedings forcing the shaken magistrate to scamper for safety even leaving her shoes behind.

Nyaloti was making a ruling on whether Mustafa has a case to answer. She later forgave him and the trial continued.

“Cuff him, this is the second time he is turning violent and attempting to attack me,” said the Chief Magistrate.

It took the intervention of the court orderlies and prison officers to contain Mustafa who turned aggressive towards the magistrate.

The officers wrestled him down to the floor and cuffed him before marching him out of the courts.

Nyaloti was forced to retreat to her chambers in fear of her safety after Mustafa started to charge towards her.

It is alleged that on February 16, 2019, at Bangladesh area in Jomvu, he sodomised XY- a child aged three and a half years.

He denied the charges and was released on a bond of  Sh200, 000 with a similar surety.

According to police records, Mustafa had been previously charged with sodomising another minor and was sentenced but later was acquitted by the High Court upon appeal.

Today, other court matters were forced to adjourn to allow the prison officers to escort him out of the court.

Mustafa had on several occasions become arrogant and interrupted the court proceedings.

Despite the magistrate listening to his rants and complaints without interruption, the accused became adamant, was dissatisfied and decided to turn violent.

However, Mustafa insisted that he wanted the matter transferred to another court and demanded that the magistrate determines whether he has a case to answer or not.

“Your honour there is no need for you to proceed with the ruling. I have no faith in your court and want you to transfer the matter before another court. I want the high court to decide on this matter because I feel justice is not being done,” said Mustafa.

Mustafa declined to allow the magistrate to make a ruling and said that he won’t ever attend the court until he is allocated another court.

Mustafa proceeded to utter abusive and unprintable language in court and swore that he will not come back to court ever.

The magistrate had given him time in the last trial to file his application before the high court to have the matter determined afresh.

“I have no objection if you want to file your application before the high court to have the matter transferred to another court but meanwhile the case will proceed before me until you get an order stating otherwise,” said Nyaloti.