Police officers are at the forefront in helping the government curb the spread of coronavirus across the Country.

However, it has been revealed that they do not always adhere to the safety measures laid out by the government to avoid the spread against the deadly virus.

In an exposé done by NTV’s Denis Okari, he shed light on ways police officers are endangering not only their own lives but those of others as well while in the line of duty. 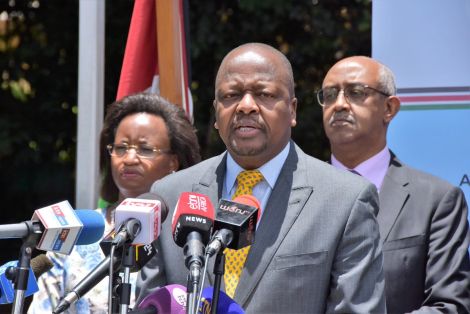 Through hidden cameras, the reporter captured the current situation at Kamukunji Police Station, where officers go about their usual business.

From the video, no police officers could be seen wearing any sort of protective gear as they went about their everyday duties, completely oblivious to the danger we are currently facing dubbed Covid-19.

There was also no presence of hand sanitizers or a designated water point where officers could wash their hands, which one of the key directives issued by the government in a bid to curb the spread of the virus.

In addition, the officers freely interact with suspects throughout the day. In fact, they can be seen serving them with morning tea before signing out and changing shifts.

On the other hand, those on remand do not practice social distancing, with the hidden camera showing a grim view of what could only be described as zero distancing.

Bearing in mind that the officers deal with countless people each and every day, Okari argued that it was of paramount importance for them to be extra vigilant in adhering to government directives regarding combating the deadly virus.

Health CS Mutahi Kagwe has constantly stated that one of the basic ways to combat Covid-19 is to wash hands or alternatively use hand sanitizers.

Below is the video courtesy of NTV;