Home General Can Mt.Kenya Defy Uhuru And Vote For Ruto In 2022? 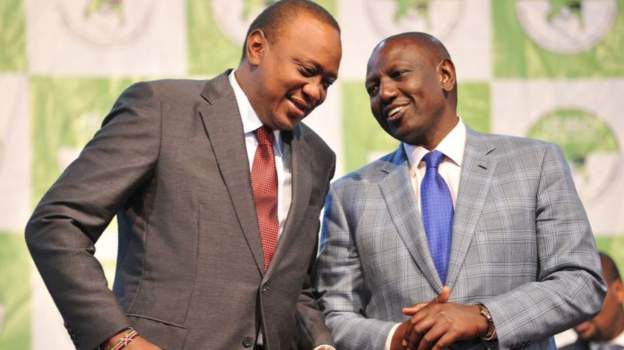 Deputy President William Ruto appears to have given up getting the support of his boss Uhuru Kenyatta in 2022.

Instead, Ruto is working on a strategy to vanquish both the President and his newfound soulmates by decisively beating Uhuru even in his own Mt Kenya backyard.

UhuRuto was powered into leadership largely through the majoritarian vote basket of the Kikuyu and the Kalenjin.

This means their acrimonious divorce – a long time coming –  that clearly played out at the weekend could deal Ruto a staggering blow.

On Sunday, a confident Ruto told off the President for suggesting it’s time for other tribes to lead and dared him and the handshake team to a political duel.

“We are ready and we know leadership comes from God and the people. Let’s meet at the ballot,” he declared.

But can Mt Kenya defy Uhuru and vote for Ruto against the President’s wishes?

He said, “Anyone who wants to talk to the Agikuyu should speak with Uhuru.”

However, allies of the DP believe Ruto will successfully defy ethnic boundaries and set a historical record.

They said Ruto has built a close relationship with the people and they would not abandon him.

“He [Ruto] will not get the support of Mt Kenya alone but the entire country. We are moving away from tribal blocs. People want to support someone who will change their lives,” Nandi senator Samson Cherargei said.

However, Kikuyu Council of Elders chairman Wachira Kiago said people from Mt Kenya region will be waiting for Uhuru’s direction on the path they should take politically.

“Every region has its leader and in Mt Kenya, it is Uhuru. The silent majority are waiting for their leader to speak,” he told the Star.

“He is about to be dismantled this year,” Munga told the Star

“We need to change the narrative and the conversation of our political engagement away from ethnicity and personality-based politics,” Ichung’wah said.

He said Kenyans will vote for their leaders based on the pledges they make and their track records.

This was also the position of Embakasi West MP George Theuri.

Kimilili MP Didmus Barasa maintained Mt Kenya people will support the Deputy President because of his plans for them and not because other leaders tell them who to vote for.

“Ruto has worked closely with the people from Mt Kenya region, even before the handshake. He is likeable in that region and the people there will support him in 2022,” he said.

Barasa added that 70 per cent of the people in Mt Kenya will support Ruto even without Uhuru’s blessings and the number would go up drastically if the President endorses his deputy.

“We will not wish Uhuru away because we still need his support,” he said.

Political analyst Kariuki Ngunjiri said the Deputy President does not need any endorsements to get support from Uhuru’s base, but if it came, it would perhaps influence the undecided voters.

“The Deputy President has been able to create close friendship with Uhuru’s political base. Over time he has built a stable grassroots organisational infrastructure that sees him as the most suitable successor to the President,” he added.

Ngunjiri further added that the people of the mountain have been with Ruto for the last eight years even without the accompaniment of the President.

“Ruto has sustained his bond with the people of Mt Kenya by visiting them almost on every consecutive weekend for funds drive events,” he pointed out.

Political commentator Daniel Orogo also believes Ruto will get a significant amount of votes from Mt  Kenya region but the votes will not be a bloc.

“Young Kikuyus who have historically been disenfranchised by the system and as result have suffered a massive unemployment believe in the hustler narrative and Ruto’s presidency to offer hope,” Orogo said.

He points out, however, that it would not be an easy task for Ruto to win the hearts of Mt Kenya region.