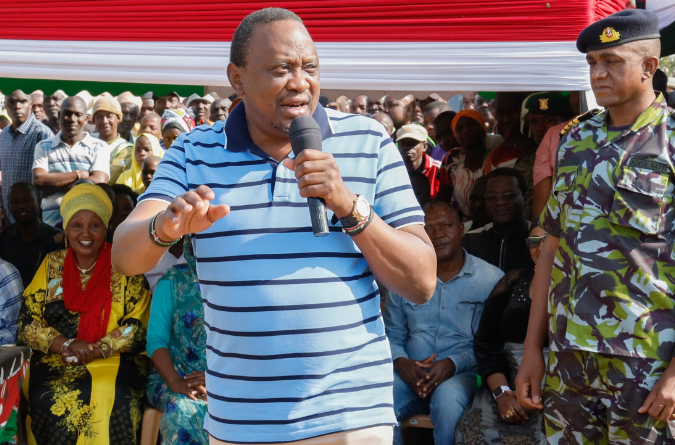 President Uhuru Kenyatta on Monday appeared to throw jabs at his deputy William Ruto over the ‘hustler nation’ narrative.

Speaking to Kikuyu stations, the President warned his Mt Kenya backyard that the ‘hustler’ narrative would set a dangerous precedence.

The Head of State said that there was no way that one can deal with the issues facing Kenyans by dividing them along the class lines.

“There are people who are focused on divisions. But let me tell you the truth. Please, there is nothing as important unity in this country,” Uhuru said.

He added; “I am begging you our people, do not be incited by people just because of a few coins.”

Ruto has been pushing the ‘hustler’ narrative where he says that every hustle matters and the government should deal with the issues affecting the ordinary citizen.

His allies have used this to push for his 2022 bid by branding his competitors including Raila Odinga and Gideon Moi as dynasties.

But Uhuru told the Mt Kenya voters not to be misled by this narrative saying that it was likely to cause more divisions in the country.

The President was speaking on Inooro, Kameme, and Gukena radio stations in an interview that was recorded on Sunday evening.

Uhuru is known to retreat to his backyard either in person or on vernacular radio whenever he wants to directly address that constituency.

Uhuru revisited his recent comments in Vihiga where he said he would use the same anti-dynasty logic to says that Kenya had been led by two tribes and it was time for others to take over.

“My comment during the funeral seemed to have touched a raw nerve. Did you see the reaction it elicited?” Uhuru said while laughing.

He explained that he made the comment to caution people that leadership emanates from uniting Kenyans, empowering them, and not dividing them.

“We must focus on what will protect you, your children, and your children’s children. And don’t get me wrong, I am not forcing you to be with me but don’t trust anyone blindly,” the President said.