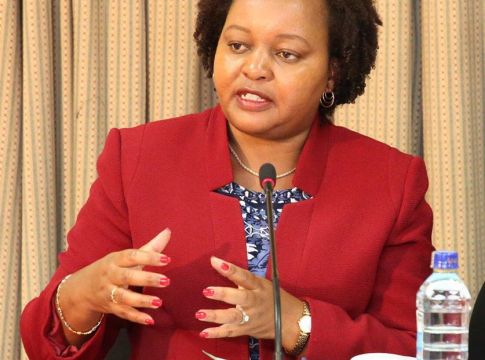 Kirinyaga Governor Anne Waiguru’s homes in Nairobi and her Kirinyaga offices were on Thursday raided by EACC detectives.

EACC said it was conducting investigations into allegations that the Governor and other officials of the County Government of Kirinyaga, were irregularly paid travel allowances of Sh23 million.

“EACC is in the process of establishing whether the trips were actually undertaken and whether the documents were genuine,” he said.

The EACC sleuths are said to have raided her homes saying that they had a warrant for the search.

“Our officers have been granted access to several offices and residences with a view of retrieving information that may be useful to the ongoing investigation,” Mbarak said.

The raid comes a month after Kirinyaga MCAs impeached Waiguru who was later reinstated by the senate.

The county chief pleaded with a senate committee to dismiss the MCAs’ case against her terming it trivial and full of innuendos.

She added, “Outside conspiracies visited on us with the help of a few local leaders have brought shame and humiliation to us at home. I pray that it should never be allowed to happen again.”

While acquitting her over impeachment, the Senate concluded that “there exists a well-orchestrated and complex web of corruption in the tendering process at the county government of Kirinyaga.”

Sources said the EACC intends to scrutinize all the controversial procurement that has dogged Kirinyaga county.

“The imperests payments that MCAs raised in their petition are the main issue that concerns her [Waiguru] though there are other issues,” a highly placed source at the EACC told the Star.

During her impeachment, MCAs claimed Waiguru was irregularly paid travel allowances amounting to Sh10.6 million “yet she did not make the trips”.

The MCA had claimed that Waiguru presided over a corrupt and joint criminal enterprise by ensuring persons who had a close association with her presided over the evaluation and award of tenders.