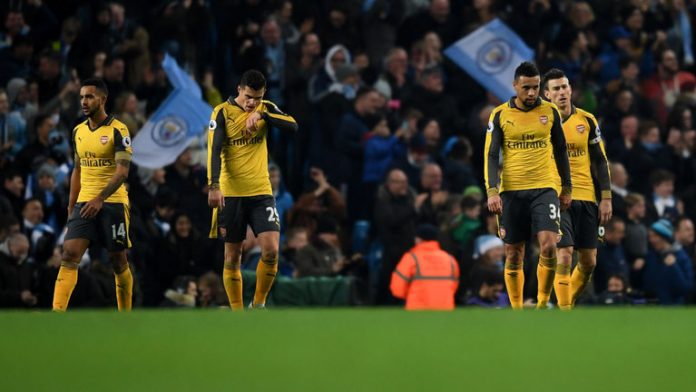 suffered their second 2-1 away defeat of the week on Sunday to slip nine points behind Premier League leaders Chelsea. The Gunners had led at both Everton and Manchester City but on both occasions were pegged back for damaging losses.

Here, we look at five factors behind their faltering title challenge…

Arsene Wenger had made a point of praising his team’s character and resilience after their 3-1 comeback win over Stoke nine days ago. It’s a symbolic fixture for the Gunners, given their recent struggles and run-ins with the Potters, and the three points – which temporarily took them top of the Premier League – were celebrated as a milestone moment. But, for all that talk of strength of mind and fighting spirit, in their next two games Arsenal have surrendered two 1-0 leads to lose at Goodison Park and the Etihad Stadium.

It’s an aspect Graeme Souness picked up on, too. “It’s a mirror image of the Everton game,” he said of the result against City. “You say, what did Everton do tactically, did they do something dramatically to change the way the game was going? No they didn’t. They were just more aggressive all around the park. The biggest reason for the change today was City became an aggressive team and they were first to everything in that first half.”

It’s something Wenger must address – and with more than just words to the press.

Linked to Arsenal’s ability to perform under pressure are their results in the big matches. And there’s a clear trend.

In nine matches against teams currently in the bottom half of the Premier League this season, Arsenal have won seven and drawn two. They’ve swept the likes of Hull City, Sunderland and West Ham aside. But their record against teams in the top half is an issue.

Of course, against tougher opposition, Arsenal are likely to experience poorer results. But they’ve won just three of eight matches against top-half teams, losing to Liverpool, Everton and Manchester City and drawing with Tottenham and Manchester United. Their comprehensive win over Chelsea is their only victory over a major title rival this season.

Arsenal topped the mini-table between teams in last season’s top four, with Wenger blaming their performances against “lower teams” for losing them the title. This time around, it’s the big matches which are proving costly.

In the wake of the defeat to Manchester City, Wenger first pointed to referee decisions and then the physicality of his players as reasons for defeat.

This was Arsenal’s fourth away game in their last five matches. They’ve had one midweek off since mid-October and the manager believes the efforts took their toll in the second half.

“I feel we dropped physically in the second half,” he said. “You could see when we won the ball we didn’t come out quickly enough anymore and that allowed them to press us more and win balls back and we lost many more balls than in the first half.

“Unfortunately what is horrible is on the schedule. We knew it was a difficult week because we had the Champions League game [away to Basel] before that.”

Arsenal were out-run in both their defeats this week (108km v 106km at Everton and 117km v 112km at City) so there’s evidence to suggest they’re flagging. But the majority of Premier League teams played Wednesday-Saturday this week, so the schedule could have been worse.

When it comes to fatigue, the problem Wenger has had is injuries have limited his options to rotate – and left him without key players.

Arsenal drew with Manchester United and Paris Saint-Germain when right-back Hector Bellerin was sidelined, Shkordan Mustafi is undefeated in the red shirt since his summer signing but they’ve lost the last two with the centre-back out injured, while the Gunners’ record with out-of-action Santi Cazorla starting reads: played 10, won eight, drawn two.

Arsenal currently have eight players in the treatment room, with Alex Oxlade-Chamberlain the latest casualty, after limping out of the game against City. Only Sunderland have more players out right now.

For the first time in his Premier League career, Petr Cech has gone eight games without keeping a clean sheet. It highlights his remarkable consistency over the years – but also hints at a vulnerability in Arsenal’s backline.

They have conceded fewer goals than Liverpool and Manchester City, the two teams directly above them in the table, but Sunday’s result made it 12 games without shutting out the opposition. “If you want to play at the top, you have to keep clean sheets,” Wenger conceded after the match. It should be said, both of City’s goals on Sunday could have been flagged for offside, but Neville stressed after the game neither were “bad ones” from the officials.

Cech and his defence will be earmarking their Boxing Day home game with West Brom as a chance to start again with a clean slate – and keep it that way.