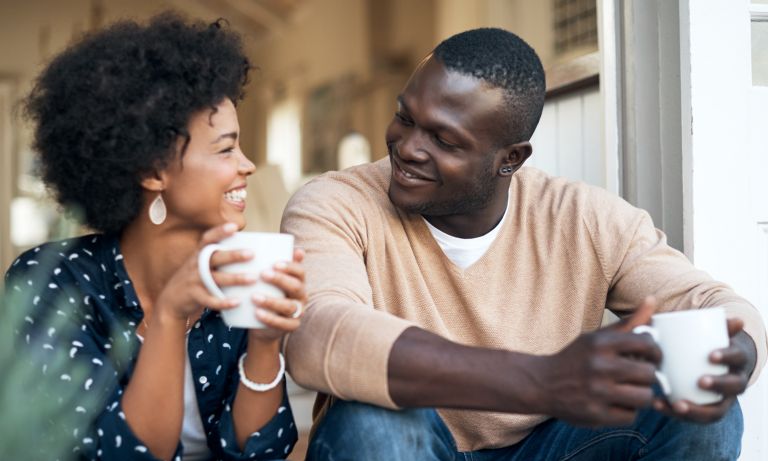 People don’t just come to individual therapy to work on individual issues. Many start because they have relationship problems and they want to make some personal changes to support that relationship.

You’re just now in a better place to do it. Women have been going to individual treatment for a long time talking about changing their male partners. Now more men are seeking treatment, but now that you’ve both done some work it’s time to come together.

“Know[ing] Thyself” May Not Be Enough

Many of the guys I work with start therapy with a drive to fix something in themselves. And that’s great because it’s taking responsibility. It’s looking at yourself emotionally in a way that you probably didn’t have any male role model for growing up. It’s unchartered territory for a lot of us and you should feel good about taking the brave step to do it. It’s not easy to call a therapist and talk about all the things you hoped would go away on their own.

The guys I see come in talking about feeling anxious, sad, or depressed. They want to talk about their Anger and lots of men show up when they’re getting ready to start a family.

Fairly often, guys make an appointment to meet me when they are told asked to do so by a female partner. This may be a reluctant phone call or not, but if they make it to the first session it usually means they also sense a pattern that continues to unfold and they’d like to confront it, change it, and end it.

I’m a believer in the Socratic suggestion to “Know Thyself” and I consider therapy to be a great place to do it. If the major thing you’re working on is how you are responding (or not responding for all the stoic, silent men that are struggling with the complaint about the walls they put up) this is an important starting place. Reflecting on your past and present relationships and seeing similar stumbling blocks gives us lots of insight into what you are bringing to the relationship problem that’s getting in your way.

Sometimes it’s simply a matter of calling attention to it. So many of our ways of interacting have become so habitual that we think it’s just who we are. But we can shift this if they’ve become a barrier to connecting.

And I know how difficult it can be for a man to seek help for, well, just about anything, but certainly for mental health reasons. For emotional exploratory reasons.

The guys who do want to do this are often certain that they can figure the relationship problem out on their own–leaving the relational issues to melt away.

Ok, and sometimes that happens. But that’s the exception, not the rule.

I’ve worked with lots of men over the years who don’t want to continue the cycle of burdening the women in their lives with the emotional labor of carrying the relationship.

This is often the dynamic they witnessed growing up.

They decide they’re going to shift that model of the Traditionally Masculine Dad by going to therapy and getting in touch with their feelings and allowing themselves to be more nurturing.

But they go about being more nurturing and emotional in a Traditionally Masculine way: Trying to do it on their own.

We can’t do relationships on our own.

We can’t get it all right on our own and then show up in the relationship fully formed.

In my previous life as an actor I always wanted to completely perfect a monologue or a song when I was in the practice rooms, on my own, then go to a class and be just that: perfect.

If I got some notes on things to try and change from peers or a teacher, I could take that in, then go back to the practice room and re-perfect the piece. By myself.

But my teacher didn’t want me to do that. She was like all those math teachers I struggled with who didn’t want just the answer, but required us to “Show your work.”

Still, I learned to do that and much more exciting things were usually found. Also, I have laughed at a few times. But I stumbled upon great moments that couldn’t have happened in isolation.

Relationships require this kind of “show your work” attitude as well because it’s not just two independent people who fit together like two perfectly cut out puzzle pieces.

We influence, shift, grow, hurt, and frustrate each other.

There’s no way to have a good, strong, lasting relationship that’s worth anything if we don’t do those things. (In my opinion, of course.)

Retreating to your corner, knowing thyself, is great, but it’s not the whole ball game. It won’t necessarily fix the relationship problems or move the relationship where you and your partner want to go.

Whenever I hear about an ongoing relationship problem where my client is telling me that they had yet another argument and he was told what he needed to do to change and he’s trying to change that…I become really curious about how things are being worked on together.

And I don’t necessarily mean “couple’s counseling” (although I’ve recommended that at times), but now that you’re figuring out yourself and undoing old patterns, are you able to show up together with your partner and work on the issues with each other. Not simply you (or them) making changes and then coming back.

In fact, there’s a therapy saying that there’s no such thing as a person giving 100% to their relationship. You each can only give 50%. If anyone is doing more than that, then the relationship isn’t balanced: If you’re giving 55% then the other person is giving (hold on while I check my math, see, I’m kind of showing my work) 45%.

There’s another therapy saying by the family therapist Belinda Berman (as quoted in the book by her therapist husband, Terrence Real):

What’s meant by this is how it can be a trap to see one individual’s negative behaviors and say they need to be the ones to change. In this situation, the “nice” guy often has some smoldering, unexpressed anger that is being enacted by the more overtly volatile partner. (This is not to say that it is ever ok for someone to be physically aggressive or violent with their partner.)

Relationship problems need to be worked on relationally.

You need to see how your two puzzle pieces are going to fit together. To look at how the friction of the two will move you toward a new picture neither of you could accomplish one-on-one.

But, it’s incredibly worth it.