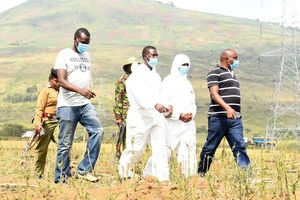 Homicide Detectives have made a major breakthrough in unraveling the puzzle surrounding the Kiambu killings, that left 5 people dead a few days ago.

Yesterday, the prime suspect in the murder of 22-year-old Lawrence Simon Warunge has led detectives to the spot where he disposed of the murder weapons and other key exhibits at a pit latrine in Mai Mahiu.

The items will be crucial in placing the author of the heinous crime at the center of the killings.

According to the detectives, the assailants made their way into the house through the rear door, where they found Lawrence’s mother, Annie, the wife of slain businessman and USA based nurse Nicholas Warunge, and hacked her to death before slitting her throat.

The commotion in the kitchen drew the attention of the second victim, Maxwell Njenga, Warunge’s 13-year-old nephew, who was confronted along the corridor and cut in the head and throat. Christian Njenga who detectives say was killed and his throat slit on his bed had just turned 13 on December 26, 2020.

Meanwhile, the recovered items will be subjected to further forensic analysis at the DCI Forensic Lab, to provide a watertight case for the prosecution, once presented in court.

Check out what DCI uncovered.