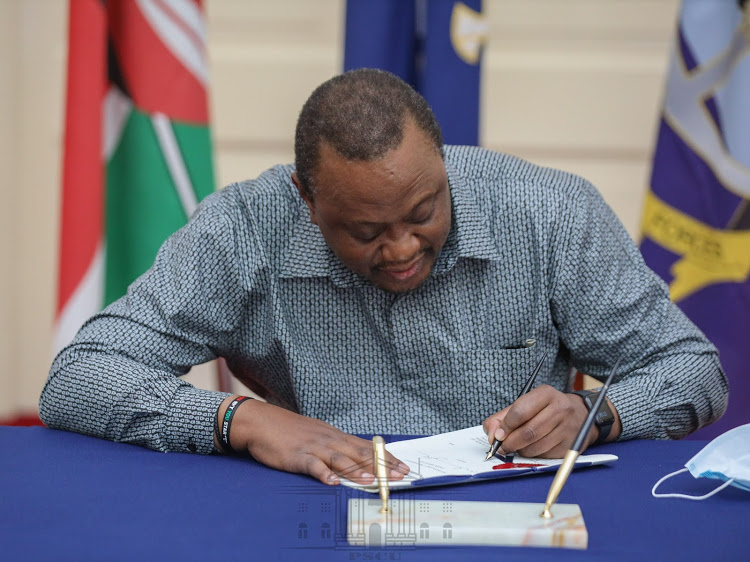 The Industrial and Commercial Development Corporation (ICDC) has emerged as a mega State agency in Kenya’s cargo transportation sector following a major shakeup.

The Government-owned financial institution will now oversee rail, pipeline, and port operations, which will be brought together under the Kenya Transport and Logistics Network (KTLN) formed yesterday by President Uhuru Kenyatta through an Executive Order.ICDC in its heyday played a critical role in growing local enterprises by advancing them funds through both loans and buying up shares, but it had in recent years appeared to slow down on such investments. However, it looks set to revive its role in the growth of the local economy following this latest reorganization that will see it co-ordinate the management of the country’s port, rail and pipeline services.

Holding company managing KTLN, the financial institution assumes the status of a super-agency as it becomes a holding company of sorts for the Kenya Ports Authority (KPA), Kenya Railways Corporation (KRC), and Kenya Pipeline Company (KPC). The president appointed John Ngumi chairperson of the ICDC board, revoking the appointment of Bernard Mung’ata.KPC, KPA, and KRC generate revenue for the country in the billions of shillings and have a rich asset base. They are critical in their respective sectors – being monopolies – and touch the lives of nearly all Kenyans in one way or another on any given day.KPC reported revenues of Sh27.7 billion in the year to June 2018 and a net profit of Sh8.5 billion. It has an asset base of Sh113 billion.

It also has a vast pipeline network – including the recently commissioned Mombasa-Nairobi line – that it uses to move petroleum products from the Kenyan coast all the way to Kisumu, and numerous other depots in between. It generates most of its money by charging oil marketing companies for use of its facilities across the country.KPA registered revenues of Sh43.6 billion and posted a net profit of Sh6.88 billion in the year to June 2018. It had an asset base of Sh149.34 billion. The ports agency operates the Mombasa Port, Lamu Port, and other inland ports, including the Inland Container Depot (ICD) in Nairobi.KRC made a profit of Sh362 million in the year to June 2017, according to the most recent available financials. Its revenues at the time stood at Sh1.7 billion. However, this has substantially grown with the start of Mombasa-Nairobi Standard Gauge Railway (SGR) passenger and cargo services. Last year, revenues from SGR stood at Sh13.5 billion. Additionally, ICDC, which has over the years invested in various firms including Centum and the troubled Uchumi Supermarkets, will now be exempt from merger plans with IDB Capital Ltd and Tourism Finance Corporation (TFC) to form the Kenya Development Bank (KDB). These plans have been in the making for years, and Treasury had in May published a draft Kenya Development Bank Bill (2020) in which it had envisioned the formation of a single cross-sector lender with “sufficient scale, scope, and resources”.

Taking ICDC out of the merger equation is likely to have an impact on the scale and resources of the proposed lender. Ngumi — whose second three-year term at KPC was coming to an end — will nonetheless have his hand’s full oversight Kenya’s ports, rail and pipeline operations.“KTLN will leverage the efficiencies and synergies of the four State agencies so as to achieve Kenya’s strategic agenda of becoming a regional logistics hub,” read the statement from State House. The president’s directive also led to the reorganization of more than just the ICDC – the boards of KPA, KRC and KPC got new member appointments, with Rita Okuthe appointed the new chairperson of the pipeline board. According to State House, the new transport network structure is aimed at lowering the cost of doing business in the country, which would be achieved through the provision of port, rail, and pipeline infrastructure in a cost-effective and efficient manner. It further hinted at possible law review in the future, with the goal of collapsing the three entities under the same corporate umbrella.“In the new arrangement, the ICDC will act as a holding company to the three agencies, and be responsible for the management of the State’s investments in ports, rail, and pipeline services,” said State House. Parastatal reforms“The new framework also allows for the centralization and coordination of operations without amending the existing laws or causing undue disruption to the legal structuring of the State entities. This helps to secure comfort with the concept, and utilize the experience to guide the development of a more permanent legally structured organization.”The four State agencies were further transferred to the Treasury, which State House said was in line with the recommendations of the Presidential Task Force on Parastatal Reforms. Former presidential advisor Abdikaddir Mohamed postulated that because of the huge need for cash to meet the Government’s planned spending, it was better to have the parastatals domiciled at the Treasury.“The Treasury has the statutory oversight role on all parastatals – it owns the money and assets in the agencies on behalf of Kenyans,” he said. He, however, noted that the agencies have been dogged by claims of corruption and they would have to improve oversight for the president’s new directive to work as envisioned. His sentiments were echoed by former Mandera Senator Billow Kerrow, who added that although the agencies were highly liquid, they were also heavily indebted, and the Treasury could be looking to protect them from further exposure.“The president could be keen to control the operations of these parastatals through the Treasury because they have huge infrastructural programs and big contracts. It would be prudent to monitor procurement on the tenders and ensure they are well managed,” said Kerrow. The four agencies will now be required to reorganize their operations to ensure that they are all in sync, and are expected to enter into new agreements within 30 days.ICDC will also be exempted from the Mwongozo governance code that guides the boards and management of State-owned entities, which is expected to enable it to move with some degree of ease.“The ICDC board will be responsible for securing the achievement of the commercial vision and objectives of KTLN … so as to operate as a single coherent unit. For this reason, the board of ICDC is exempted from the requirements of Mwongozo on multiple directorships,” said State House.