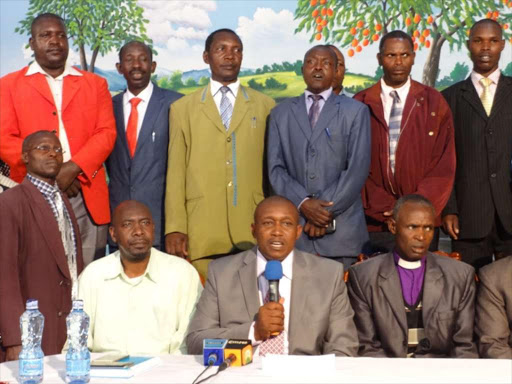 Bishops, pastors, and other clergymen from Thika, Kiambu County have called upon the government to review the measures put up for the church to re-open saying that it is not practical since the church leadership is headed by a clergy which is above age 58.

Speaking during a meeting to thank God after the government allowed resumption of churches, the pastors and reverends singled out the age limit for church elders, the number of congregants in attendance per worship session, and exemption of children from worship services.

Led by 70-year-old Rev Joseph Mutunga of New Life church in Kiganjo village, the faith leaders said most churches are led by elderly persons and that allowing the youth to oversee services in their absence will cripple operations.

Others led by reverend Simon Githiora Njuguna of Makongeni Presbyterian church and Francis Kilango of Springs of Life Apostolic Ministries said while they are ready to adhere to laid down the measure, some of them have proven to be a daunting task that will require extra efforts.

They especially took issue with the exemption of children from services saying the move will set the stage for deterioration of societal vices and erosion of morals among the youth.

The clerics thereby called for the inclusivity of all church members so long as there will be social distance, washing of hands, wearing of masks, and avoidance of greetings.

During the thanksgiving event, MP Wainaina promised to donate hand washing units to all churches in the entire constituency as a way of supporting the houses of worship resume operations.

The MP urged churches to also adopt innovations such as disinfection booths to keep away the deadly virus from members.

On July 6, President Uhuru Kenyatta set in motion the stage for a gradual resumption of congregational worship to take effect.

He said the phased reopening of places of worship will see only 100 congregants allowed into the sanctuaries.

Sunday Schools and Madrassas shall remain suspended until further notice, and in-person worship shall not include congregants under the age of 13 years or above the age of 58 years or persons with underlying conditions.

Also in the strict houses of worship reopening measures will see minors below the age of 13 be exempted from worship services.

As faith leaders strategize over how to prevent the spread of disease by re-evaluating common practices in churches, Thika priests say some conditions are impractical and urged the Inter-Religious Faith Council that has been mandated to oversee the reopening process to relax some of them.