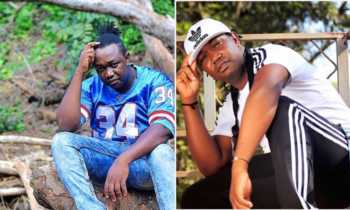 Gospel artiste Ruth Matete shot to fame in 2012 after she was crowned the winner of Tusker Project Fame season 5. She won Ksh5 million.

But life changed for the worst and in previous media interviews, she said she was mocked for giving a tenth of the prize money to the church as a tithe.

A few months after winning, Ruth’s money was over and she was back to zero.

‘I TRIED TO COMMIT SUICIDE BECAUSE I HAD NEVER BEEN IN A PLACE WHERE I WAS REQUIRED TO HANDLE SO MUCH PRESSURE. YOU SWITCH ON THE RADIO AND THE TOPIC IS RUTH MATETE ‘CALL US AND TELL US WHAT YOU THINK ABOUT HER DRESS #RUTHMATETEDRESS. IT WAS REALLY HARD AND I EMBARKED ON A FASTING JOURNEY FOR 21 DAYS BUT ONLY MANAGED TO FAST FOR 16 DAYS ONLY,’ SHE SAID IN A PREVIOUS INTERVIEW.

Well, Ruth dated Prince Tsyder popularly known as Toni from Tahidi High drama. He was accused of squandering Matete’s money and for the first time ever, he responded to the allegations.

Speaking in an interview with Dennis Mugo on his YouTube channel, Prince said,

‘MY RELATIONSHIP WITH RUTH MATETE WAS ONE OF THE HARDEST. TO SOME POINT HAJUI KAMA ALISPOIL MY LIFE COZ WATU WANAJUA TUU TULIKUWA KWA RELATIONSHIP. OOH TSYDER ALICOME HAPA AKAKULA PESA YOTE NA NILIMJUA KAMA HIYO DOO HAIKO. […SHE DOESN’T EVEN KNOW IF SHE MESSED UP MY LIFE. WE WERE IN A RELATIONSHIP AND GUYS ASSUMED I SQUANDERED ALL HER MONEY. WHEN I MET HER, SHE DID NOT HAVE ANY MONEY].’

I DON’T THINK RUTH IS A STUPID GIRL WHO WILL ALLOW A MAN TO COME AND SQUANDER HER MONEY. SHE IS NOT THAT STUPID, AT LEAST SHE SHOULD HAVE CLARIFIED I WAS A TOTALLY DIFFERENT GUY. WE HAD CHALLENGES JUST LIKE ANY OTHER RELATIONSHIPS AND IF YOU REALISE I NEVER SPOKE, MY FAMILY EVEN STARTED TO DOUBT ME.