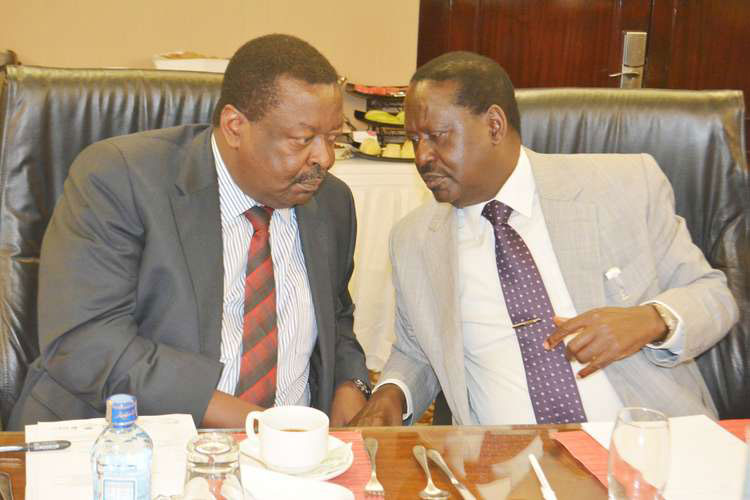 A bitter row has erupted between ODM leader Raila Odinga and his Nasa principals, dimming their chances of fielding a joint candidate to face Deputy President William Ruto.

ANC boss Musalia Mudavadi termed Raila as a political con and alleged the handshake was a pre-arranged settlement before the repeat presidential polls in 2017.

The latest fallout erupted after Raila declared that he would not back any of the Nasa principals for the top job, terming them cowards for skipping his swearing-in as the people’s president.

Musalia said Raila’s remarks reeked of indefensible deceit and claimed he faked the “illegal swearing-in to accelerate his yearning for a handshake” with President Uhuru Kenyatta.

For the first time, Musalia claimed Raila pulled out of the repeat presidential elections after negotiating the handshake with Uhuru.

“But there is more cowardice to pull out of a repeat election, disguised as a protest of pre-rigged outcome when in actual fact it’s only because the act is part of a pre-arranged settlement for yourself,” Musalia said through his spokesman Kibisu Kabatesi.

But ODM hit back, describing Musalia as a failed politician whom Raila beat hands down in 46 counties with a virtual tie in his home county when he contested the presidency on his own in 2013.

He said the trio must stop “dancing around their village huts and travel the breadth of the country” to seek the presidency.

“We advise the three that if they want the presidency, Raila does not keep the ballots at his home. They must stop dancing around their village huts and travel the breadth of the country seeking that mandate. Raila is focused on helping the President deliver on the unity agenda for all Kenyans, and building the bridges to a prosperous future,” Sifuna said, adding that Raila is not interested in any 2022 talk.

In 2002, Sifuna said, Musalia fled the Rainbow movement and returned to be a three-month VP when the whole country was recalibrating its politics and seeking a fresh start.

“Hon Kalonzo Musyoka on the other hand was the quintessential one-party rule man and a late entrant to the 2002 liberation movement. He only opted to join Rt Hon Odinga in 2013 after his cunning attempt to exploit the ICC tribulations of President Uhuru and DP Ruto fell flat. He was seeking a landing spot and got a soft one,” Sifuna claimed.

“The less I say about Wetang’ula, the better,” he added.

The latest row is the clearest signal that the opposition may not be able to field a single candidate against Deputy President William Ruto in the 2022 contest.

Both Raila and Musalia are angling for the endorsement of President Kenyatta, believed likely to play kingmaker by delivering the Mt Kenya vote block.

Musalia said Kenyans should ask themselves what a man incapable of keeping a vow with friends is capable of if he wields absolute power.

“He [Raila] hates being reminded that he’s a political con but reminded he’ll be until he forgoes deceit. Politics of deceit doesn’t befit a Kenyan leader,” Kabatesi said

Wiper leader Kalonzo Musyoka was however more diplomatic, stating that he does not need Raila’s endorsement to win the presidency.

Addressing a congregation at the Kyemutheke African Inland Church on Sunday, Kalonzo declared that the only endorsement he requires is from God.

“I only seek the endorsement of our Heavenly Father who delivered the children of Israel from bondage in Egypt, taking them through the desert to the Holy Land,” he stated.

The latest war of words comes hot on the heels of an announcement by Mudavadi, Kalonzo as well as Gideon Moi (Kanu), and Moses Wetang’ula that they would cobble another super coalition dubbed “Sacred Alliance”.

The four have been toying with the idea of holding together and running against Raila and Ruto.

On Saturday, Raila lashed out at his former Nasa co-principals for abandoning him during his hour of need and told them that they should forget his backing.

The ODM leader said he was left all alone by the two during his swearing in as the people’s president at Uhuru Park.

“When I was being sworn-in, they were nowhere to be seen. Why should I pass the baton to them yet they ran away from me at my time of need?” wondered Raila.

But yesterday, Kalonzo declared that he did not believe in settling political debts.

He said with his wide legal expertise, there was no way he could have participated in a mock, unconstitutional exercise.

“How would I have participated in a fake and futile exercise that I clearly knew was unconstitutional?” he posed.

The Wiper leader declared “a new dawn” saying the Sacred Alliance, composed of Musalia, Wetangula, and Moi, was unstoppable. “An idea whose time has come cannot be stopped. Teacher mchezo! (Let’s stop joking!)” he said.

On January 21, Makueni MP Dan Maanzo, an ally of Kalonzo, warned the Nasa trio had no option but to stick together if they sought to vanquish Ruto.

“If they don’t work together they will definitely lose against Ruto in 2022,” Maanzo told the Star.