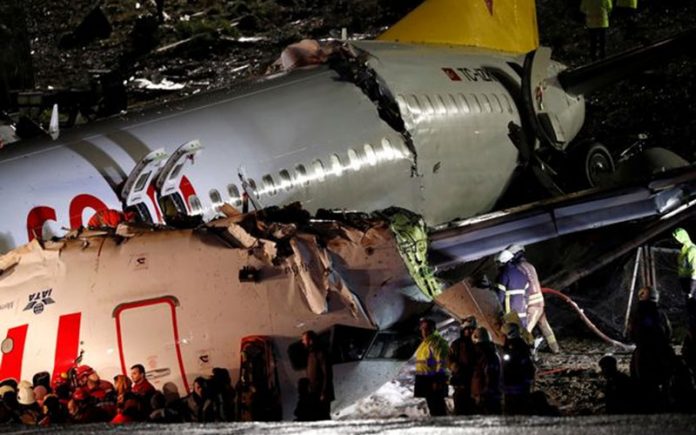 Three people have been confirmed dead after a plane skidded off a runway, split in three and burst into flames.

At least 179 people have been injured after the plane broke apart in the horror crash at an airport near Istanbul, Turkey.

In the last few minutes, Turkish health minister Fahrettin Koca has confirmed the sad news that a person was killed.

Images show serious damage to the fuselage, with passengers being evacuated through the cracks caused by the impact that split the plane into pieces.

Rescuers plucked survivors from gaping cracks in the fuselage that left the cabin fully exposed, with the aircraft’s damaged seats and torn fittings visible as emergency crews worked on the aircraft.

Bloodied passengers could be seen on a shuttle bus ferrying survivors away from the plane following the incident.

An expert speculated that the wet weather may have caused the incident.

Turkey’s Pilots Association President Necmi Ekici said the incident may have occurred because there was no time to clear the water accumulated on the runway, according to Turkish media.

Istanbul Governor Ali Yerlikaya said earlier that the plane was carrying 177 passengers and six crew from the western province of Izmir. He said the wounded were being treated at 18 hospitals in the area.

“The plane could not hold on the runway due to poor weather conditions and skidded for around 50-60 meters,” Yerlikaya told reporters at the airport.

The plane, a Boeing 737-86J, split into three pieces after what Yerlikaya said was a drop of around 30 to 40 meters at the end of the wet runway. Footage showed the plane landing and continuing at a high speed off the runway.

Pegasus Airlines said in a statement that the plane had gone off the runway and that passengers were being evacuated. A spokesperson for the company did not provide further details.

The news comes just hours after 21 people died in an avalanche tragedy in the country.

Rescuers were called out initially after two people and a minibus was buried under the snow in Bahcesaray, eastern Turkey.

During the rescue attempt, a second avalanche buried more than 50 members of the search and rescue team.