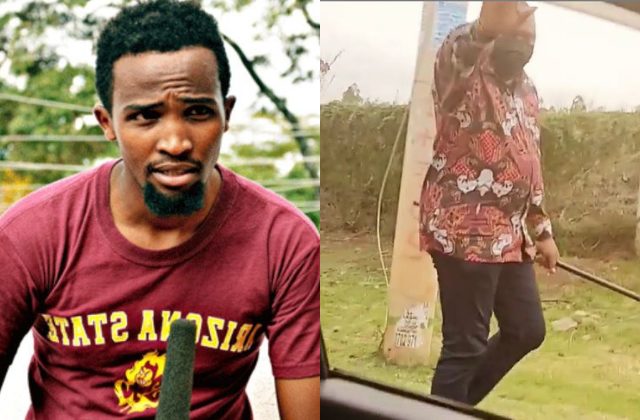 Award-winning actor Pascal Tokodi has received a lot of criticism for telling the president of the Republic of Kenya Uhuru  Kenyatta to watch his TV show, Selina.

This happened yesterday when they had a chance meeting.

“SIJALI. I HAD MY TWO SECONDS WITH THE PRESIDENT AND HE SUPPORTS LOCAL TALENT. IF I HAD MORE 15 MORE SECONDS. I WOULD LOOK AT WHAT I DO FOR A LIVING. THE STRUGGLES THAT WE GO THROUGH IN THE ENTERTAINMENT INDUSTRY. I AM LIVING MY LIFE AND I AM HAPPY WITH GRACE AND SO WE KEEP PUSHING.”

He added that the trolls don’t faze him.

“CHECKING OUT THE COMMENTS, I AM USED TO THE TROLLS AT THE END OF THE DAY WORDS DONT HURT. I AM A VERY POSITIVE GUY.”

Tokodi narrated how after he met the president he went home and woke up his celebrity wife to tell her all about it.

“GRACE ALIPATA SHIDA, I WOKE HER UP AT NIGHT TO TELL HER THAT I HAD MET THE PRESIDENT.”

“I REGRET I DID NOT GET HIS SELFIE. MY DAD HAS A PHOTO WITH THE PRESIDENT AND SO IT WOULD BE SO GOOD.”