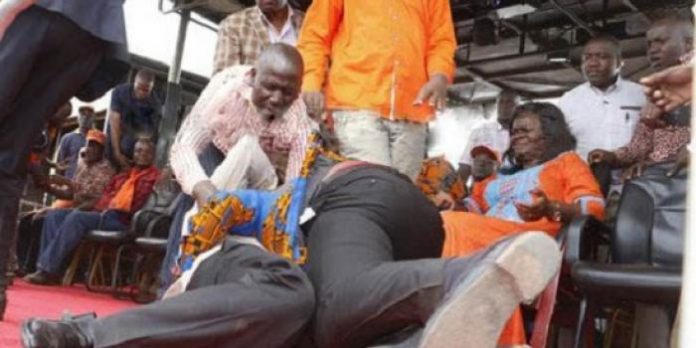 Chaos erupted at an ODM rally in Homa Bay on as supporters of area governor Cyprian Awiti and Kasipul-Kabondo MP Oyugi Magwanga’s clashed at a local stadium on Sunday. Trouble started when supporters of the two leaders attempted to reach the main dais at Homa Bay Stadium. While Awiti’s supporters chanted slogans in support of his re-election, those of Magwanga, who has declared his interest in the governor’s seat said he must be voted out next year. And when push came to shove, a shouting match ensued before it turned physical. The matter was compounded further when Homa Bay Town MP Opondo Kaluma engaged Mr Washington Ogaga, who is seeking to unseat him, in a wrestling match.