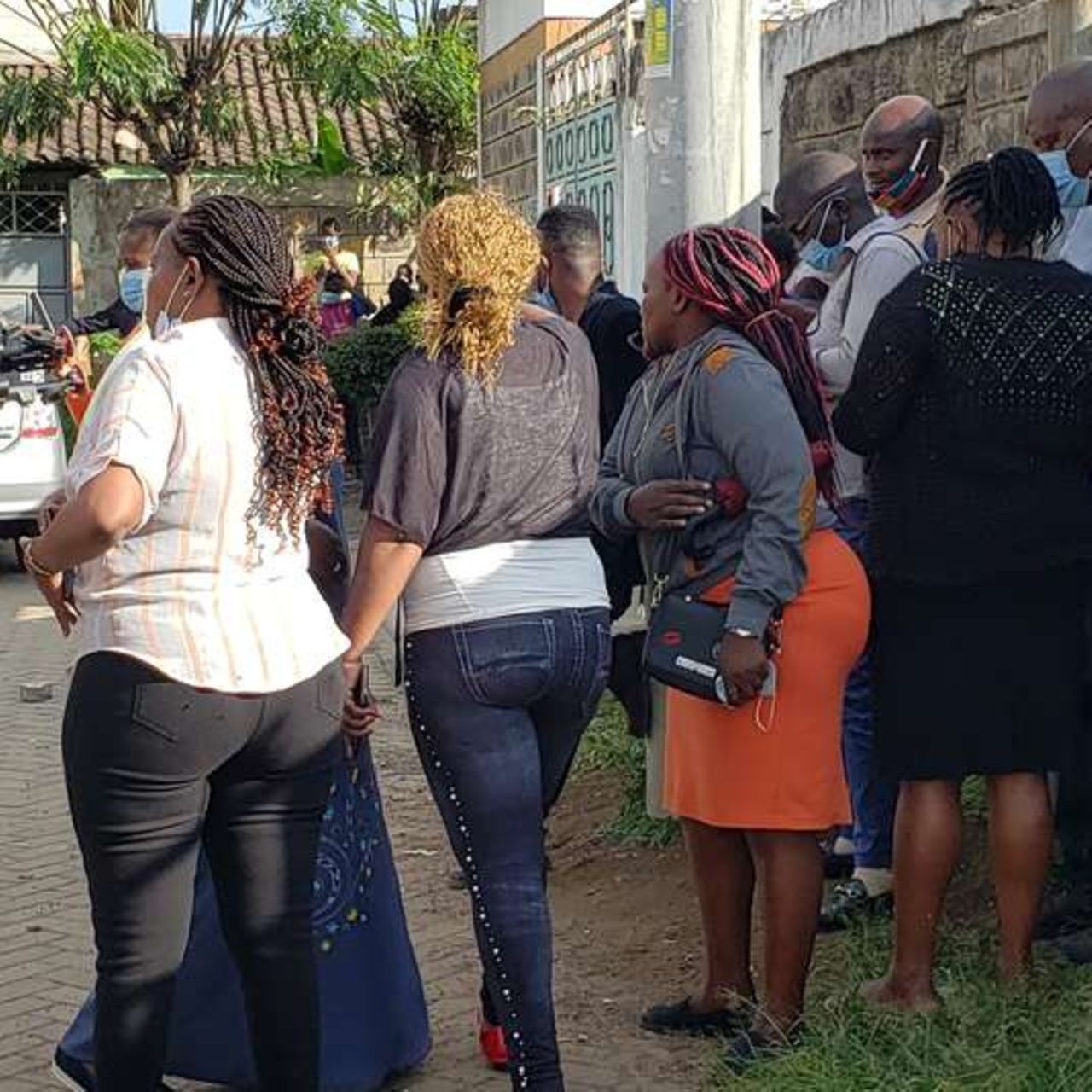 It started with a video released on Thursday of a woman calling for help to find her missing 16-year-old cousin, which was then widely shared on social media.

Seven teenage girls had disappeared without a trace, she said in the video while pleading with anyone who could help find her cousin, Shanice Muoka,  to do so.

She said that she believed Shanice and six other 16-year-old girls had been trafficked for sex.

There was an outpouring of rage and concern, which by last evening had led to the arrest of six of the girls,  some of whom had been missing for 11 days,  by Directorate of Criminal Investigations detectives and held at the Child Protection Centre in Nairobi’s South B.

The complex story of the seven “missing” minors led us to Komarock, the home for a number of them and an alleged base for what seems like a child trafficking syndicate involving shadowy adults and a peer group on Instagram dubbed Cartygang.

We knocked at the home of a teary Pauline, the mother of one of the girls, Natalie.

We found Pauline and other distraught parents wracking their heads on what to do with the situation.

One couple could barely hide their worries about the whereabouts of their second-born daughter, Tabby.

Much later, the nearly breathless mother of Shanice, who lives in Kamulu, over 10 kilometers away, arrived.

Suddenly, in the middle of the interview, Braso, an agemate and friend of the missing girls, who had all along denied any knowledge of their whereabouts, showed up at the gate. She announced that she had brought in Natalie, but Tabby had refused to come home, saying she was not done with her “business”.

The arrival of Braso was received with mixed reactions. There was joy in the knowledge that there was hope but also further worry because some of the girls could still not be accounted for.

She said that Shanice, the girl whose cousin was in tears begging for her return, was “elsewhere,” without giving the address.

Then the girls walked in moments later, accompanied by three friends. They exchanged quick greetings amid the tension and relief and headed straight for Natalie’s bedroom.

Young, brilliant, beautiful, vivacious, and adventurers is how one would describe the youngsters.

Tabby and Natalie are next-door neighbors and were on Monday cleaning and washing utensils and clothes together.

According to their parents, the duo has been obedient girls and top performers in their respective schools. Until their shocking disappearance on Monday for Tabby, and Tuesday for Natalie.

“My wife, as is the norm before serving dinner, went to fetch my daughters from their room, only to find a heap of clothes arranged between the sheets to form a disguise as if Tabby was asleep. We searched with her elder sister but the girl was nowhere to be found,” said the father.

Next door, Natalie went home at 6.30 pm and said Tabby had gone to visit her aunt in Kariobangi South.

“But the next morning, my daughter was fidgety and looked confused,” said her mother. “I was alarmed, but upon asking her, she said she was bored and missing Tabby.”

Little did the mother know that the girl was planning to run away to join the friend, who had lied about being at the aunt’s place.

That evening, Natalie texted her mother saying she would sleepover at Tabby’s home, ending it with a love emoji.

It was around the same time she learned Tabby was missing and so the search started for both teenagers.

The two cases were reported at Kayole Police Station, a move that did not yield much for the 11 days the parents were in agony and tears.

We managed to engage the girls in a candid interview in their room, although they wanted it off-camera.

Natalie disclosed that they were being hosted by a friend named Maria, at an undisclosed location, where they were fed, dressed, and had fun.

She was unwilling to give details but that she told us that the treat was ecstatic.

“What is the fuss all about? Why are cameras here?” Natalie asked. We were just running away from boredom during these Covid-19 times. I would not be here if it were not for the angle the whole thing has taken on social media, with people trolling us.”

The other girls supported her, dismissing their parents as “analog” and not understanding their situation.

The teens reacted angrily to our presence and the fact that social media users created a fuss that smoked their peers out “prematurely” from their hideout.

Asked whether she knew where Maria came from, what she did for a living and whether it was safe being in her care, her answer was negative, except that she trusted her as a friend and did not need to be afraid.

“You elders don’t understand. Once you meet online, you build a bond beyond the worries and doubts you’re raising. The questions you’re asking are yours. Don’t give me undue pressure,” Natalie said.

What remains unanswered is who Maria is and who she works with, and what business she has with minors.

What was more dramatic in the confines of the room in Komarock is when the girls got to watch the video of Shanice’s cousin sobbing.

They said the woman was exaggerating and that if Shanice got to watch the video, she would laugh her lungs out as “she doesn’t care”.

“Shanice has been disappearing and returning whenever she feels like,” claimed one girl as the rest chipped amid giggles.

“She normally calls one of us and we beg her to return home. We know each other’s numbers off-head,” said another.

Meanwhile, Natalie kept saying she couldn’t wait for the drama to die down so she could hit the street and have fun once again.

I am told about 20 girls around here who are part of the ring. But we don’t know their master yet, although we suspect one of us

At around 4 pm, Tabby called her elder sister asking to be picked up as she had decided to come home.

But DCI sleuths arrested them at the central business district, and took them to Central Police Station before transferring them to the Child Protection Centre.

The four girls at Komarock were also picked up to join the two.

Shanice’s mother claims that there exists a group of traffickers based in Komarock Phase One, who recruit young, beautiful, and brainy girls into a ring of drug users, lesbians, and burglars.

“I am told about 20 girls around here are part of the ring. But we don’t know their master yet, although we suspect one of us,” she said.

“They target bright girls. All these had over 400 out of 500 marks in the Kenya Certificate of Primary Education examinations,” she added.

Their gang leader dresses them expensively and ensure their photos are shared on Instagram.

“I withdrew all phones and computers from my daughter ever since I learnt of the Instagram group called Cartygang. But her friends still have their phones and the transactions continue,” said the distraught woman.

Called upon by masters

The group gets to meet and organize their activities on social media, and only leave when called upon by their masters.

Four days after the girls disappeared, the police gave summonses for their friend Braso and her mother to appear at the station and explain if they knew the whereabouts of the girls. The duo denied such knowledge.

However, the police recorded a call in which Braso made to her brother. In the recording, the two vowed not to give away their friends’ hiding place. The audio was sent to Tabby’s phone while at the police station but deleted immediately by Braso.

Despite saying she was unaware of the friends’ whereabouts, the videos they had posted on Instagram three days ago show that she was part of the team.

Earlier, the girls had posted photographs of the group, posing, some with something looking like a cigarette between their fingers.

It is however curious why the police did not follow up the case.

Ms Mercy Kamau, an officer at the gender desk who handled the matter hung up on us when we asked how far the case had gone.

Yesterday, the DCI on their Twitter handle, confirmed having rescued the girls.

“DCI Child Protection Unit have rescued the girls suspected to be among the ones reported missing. Efforts are in place to trace and rescue the remaining girls,” they tweeted.

Being a guest of the state is not a new thing to the girls.

I started smoking bhang and drinking alcohol due to peer pressure… I don’t have a boyfriend or sponsor as said at the police station.

When Shanice disappeared sometime back, they were questioned intently about her whereabouts and what they knew about the disappearance. That is when Tabby’s father saw the red flag and decided to question the dealings these tight friends were engaging in.

After the officers left, he made the three girls write confessions about their lives, and, shockingly, one of them admitted to having started smoking bhang while in Standard Seven and having a boyfriend.

Another wrote: “I started smoking bhang and drinking alcohol due to peer pressure… I don’t have a boyfriend or sponsor as said at the police station.”

The third one too confessed to being in bad company and appeared to be remorseful as the other two.

“I promise to change. If I am found in a gang, shoot me and the gang itself. I’ll stop going to friend’s birthdays,” she concluded.

The common “bad influence” the girls wrote about involved a Bridget, said to be one of the gang leaders, and another girl named Elizabeth.

The exposure of children to uncontrolled internet reduced contact with parents, and demand for child pornography on the dark web is said to be fuelling trafficking of youngsters in a similar manner.

Some needy children engage in such sexual exploitation for material gain, while their pictures and videos are monetized.