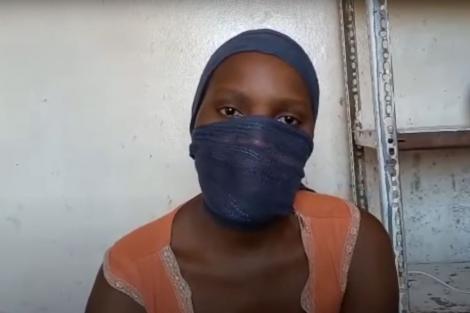 Kenyans reacted angrily on Sunday, June 28, to a video of two women held hostage in Lebanon after losing their jobs due to the Covid-19 pandemic.

In the video, the two women disclosed that they were living in disheartening conditions after being locked up in a house with several other women.

The first woman disclosed that they had been locked up in the room for three months and that they only received one meal a day.

She further noted that for the last three months she had been at work, her employer never remitted her pay to the agency.

A screengrab of a viral video that surfaced online on Sunday, June 28, 2020, from a Kenyan woman locked up in Lebanon.

“The food we receive only comes for a day. For example, when you are given a slice of sandwich, that is breakfast, lunch, and supper for that day. We are many girls here and the food is not enough,” she stated.

She further noted that many Kenyans rendered jobless by the pandemic were living in distress in the streets.

“We have colleagues who were thrown into the streets and have no help. They have phones but lack the internet and there is no way they can get to us,” she added.

Another woman, says she left Kenya for Qatar in 2019 but ended up in Lebanon with her first employer who threatened her life.

“After I complained, they sent me to another employer and they kept my money claiming that if I did not send the money home, I should let them keep it for me,” she stated.

She was later transferred to another agency without pay and three months later, the Lebanon protests, which killed 10 by April 2020 and left 540 injured, kicked off.

When the protests subsided, Covid-19 had already hit the country hence complicating her employment status.

Touched by their pleas, some Kenyans directed their anger towards the state for abandoning citizens in harsh conditions in foreign countries without enough basic needs.

“Our government has no issue with such stories, they don’t value citizens. They sell us into slavery. Just think how women young and beautiful girls have been killed in these countries and they don’t mind at all,” noted John Kimani.

“Who are these Kenyan agents. They should be held responsible. Let us have a mechanism of returning the victims back home,” added Biketi Wanjofu.

Some, however, faulted the women for ignoring warnings against seeking domestic work in middle-Eastern Countries.

“They never tell us she’s leaving Kenya? Why tell us now? The government is doing everything to stop this but they are getting away every day,” expressed Julius Kihunyuro.

“Why would someone go to gulf countries to be mistreated for a salary of Ksh10,000?? It doesn’t make sense at all. I bet there are many that suffer in silence and with no access to social media. The government may not be able to help much. It is a personal decision,” added another user.

Below is the video of the two women’s pleas: