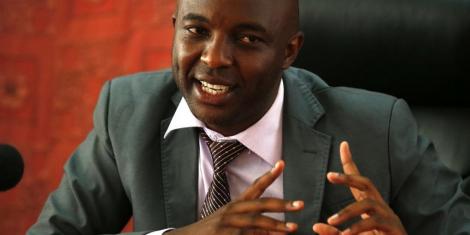 It was established that Kang’ata, who had been invited to attend the meeting at Jubilee House in Pangani, Nairobi, did not show up.

When reached for a comment, the Senate Majority Whip said he did not attend the meeting because “I was busy elsewhere, I couldn’t make it.”

National Assembly Majority Whip Emmanuel Wangwe, his deputy Maoka Maore and secretary to the Jubilee parliamentary group Adan Keynan also attended the meeting in which the party decided to pull out of three upcoming by-elections.

The no-show at the meeting – that culminated in a press conference – came a day after he reportedly rejected a push by the party honchos and President Uhuru  Kenyatta’s allies to withdraw the letter to the President.

In the letter, the senator told the President that the BBI referendum might fail in the region unless Uhuru and his handshake partner ODM leader Raila Odinga change their strategy.

He affirmed the position at a press conference in Parliament on Monday despite criticism and pressure to withdraw the letter and apologize to the head of state.

“I think I still have an obligation to talk the truth… the truth is there is a systemic political problem that needs some intervention in our county of Murang’a and in the larger Mt Kenya,” Kang’ata said.

He cited opposition to the expanded Executive, the involvement of provincial administrations and campaigns by former MPs as some of the issues working against the initiative.

“Let us emphasize the soft power and art of persuasion. In my humble view, the provincial administration in the BBI process should be invisible,” he said.

Sources intimated that Jubilee bigwigs hosted Kang’ata for a meeting on Tuesday evening, where he was asked to retract the letter, but he declined.

“They asked him to attend today’s (yesterday’s) meeting and press conference, but his phone was off all morning,” the source disclosed.

“We held a leadership meeting yesterday, he was with us…. He is still our whip until otherwise, he decides or any other things come up,” Dullo said.

But when asked whether he was ditching the President’s camp, Kang’ata replied, “I am fighting for the truth and rights. I don’t believe in Jubilee factions and divisions.”

At the press conference, Tuju and Maore said the party had not discussed punishing Kang’ata for his letter to the President.

Kang’ata has been one of President Uhuru’s foot soldiers and most trusted lieutenants in the Mt Kenya region.

In May last year, Uhuru influenced his election as the Senate Majority Chief Whip following a meeting at State House where senators Susan Kihika (Nakuru) and Kipchumba Murkomen (Elgeyo Marakwet) – key allies of the DP – were kicked out as Majority Chief Whip and Majority leader, respectively.

However, his letter and skipping party meetings have triggered murmurs and talks that he was on his way out of the President’s circles.

The letter emerged at the time his close friend nominated Isaac Mwaura joined Ruto’s camp and tore into the President and his family at the homecoming of Msambweni MP Feisal Bader. The DP attended the meeting.

Mwaura was Kang’ata’s best man during his colorful wedding held at Gathinja Catholic Church in Kiharu constituency, Murang’a county, in September 2018. The President attended the wedding.

The letter also came around the time Kandara MP Alice Wahome, a DP confidant who hails from the same county as Kang’ata, issued a statement, scathingly attacking the President for allegedly using the BBI to cling to power.

She claimed that the President is seeking to change the 2010 Constitution to help him gain control of state power while outside through what she termed a façade of democracy.

“For Kenya, to remain a truly democratic and rule of law state, our President must accept the reality that his term is coming to an end. He must ensure peaceful transfer of power in 2022 and go home,” Wahome said.

Kang’ata’s other close ally, Kiharu MP Ndindi Nyoro, also hailing from Murang’a, and who is close to the DP, has to be critical of the President and his handshake with Raila.

Nyoro served as the chairman of the National Government Constituency Development Fund Board of Kiharu during Kang’ata’s tenure as the MP.