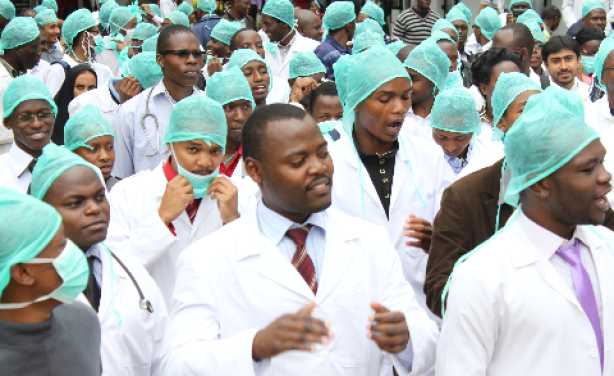 Kenya has a total of 30,636 confirmed infections, with 487 deaths, according to health ministry data.

Healthcare workers say they have not been given adequate PPE, but the government has said it has distributed enough to go round.

Doctors who contracted COVID-19 had been forced to pay out of pocket for their own treatment, he told Reuters in an interview.

Doctors in Nairobi warned on Friday they would go on strike within a week if their demands were not met: Nairobi has by far the largest number of coronavirus cases.

Richard Muga, Homa Bay County health executive, confirmed that health workers’ July pay had been delayed due to a dispute on how to allocate revenues to counties. He said the strike was illegal.

“We have tried to engage the health workers,” he said. “They have not heeded our pleas.”

A nurse in one Homa Bay hospital who did not want to be identified said patients were no longer visiting public health facilities due to the strike.

“Many patients are now going to private hospitals, or doing over-the-counter medication,” he said.

Health officials from Nairobi and Embu counties did not return calls seeking to comment. The health ministry said on Friday that Nairobi County officials were in talks with the doctors.

Dr. Doreen Lugaliki became the first doctor to die of COVID-19 in July.