The annual Diaspora homecoming convention is set to take...

The Electricity Association of Kenya (ESAK) has called upon...

Kibaki, 89, was admitted to the hospital on March 9.

“He is still hospitalized. He is in the VIP ward. Due to Covid-19, only his doctors and authorized visitors are allowed to see him,” a source told the Star.

But his private secretary Ngari Githuku insisted that Kibaki has not been hospitalized for that long.

“Was the retired President in hospital? You people probably have more information about his health than I do,” he told the Star on the phone.

On March 11, days after he was admitted, Githuku had told the Star that Kibaki was in the hospital for a routine check-up.

Kibaki, who served as Kenya’s third President between 2002-2013, has been in and out of the hospital and some of the ailments are linked to his old age and the accident he had in December 2002 at the Machakos Junction.

On January 20, 2004, he was admitted to the facility for what doctors said was a blood clot in his right leg. He was diagnosed with mild high blood pressure at the time. He was discharged eight days later.

In 2016, the former head of state was flown to South Africa where he successfully underwent surgery on the carotid artery.

In September 2019, Kibaki was in London for a series of medical check-ups. His knee was also examined.

In June last year, Kibaki was in hospital after complaining of pain in the lower abdomen. 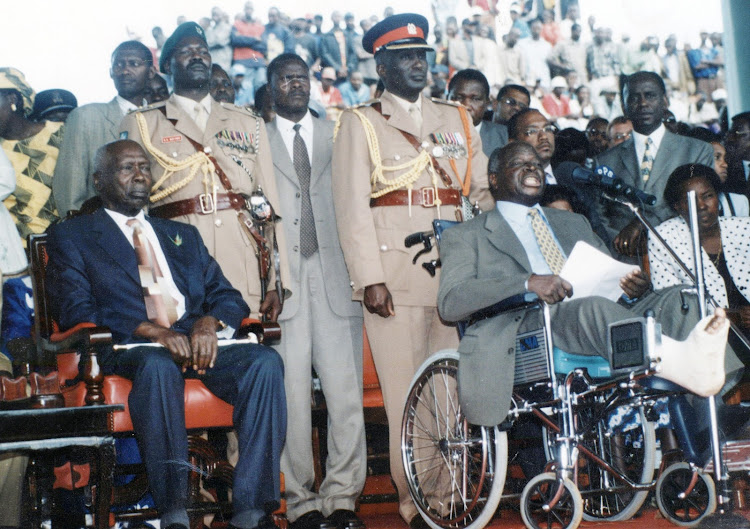 Kibaki has taken a low profile since he retired in 2013 after 10 years at the helm of power.

He was last seen in public in February last year when he turned up at Parliament Buildings where the body of his predecessor Daniel Arap Moi lay in state.

Kibaki joined politics soon after Kenya gained Independence in 1963. He served as Finance minister between 1969 and 1982 and Vice President between 1978 and 1988.

He later had a falling out with Moi and during the eve of agitation for multipartyism in early 1990, he resigned from Kanu and formed the Democratic Party.

Kibaki unsuccessfully challenged Moi in the 1992 and 1997 presidential races, earning him the position of the Official Opposition in 1998.

In the run-up to the 2002 General Election, Kibaki joined forces with other politicians including Raila Odinga, Charity Ngilu, Moody Awori, and Kijana Wamalwa (who died in 2003) to form the National Rainbow Coalition.

Kibaki was picked as the coalition’s flag-bearer and he defeated the then Kanu candidate Uhuru Kenyatta. Uhuru, the current President, had been picked by Moi to run against Kibaki.

1966 – Minister for Commerce and Industry

1969 – Minister for Finance and Economic Planning