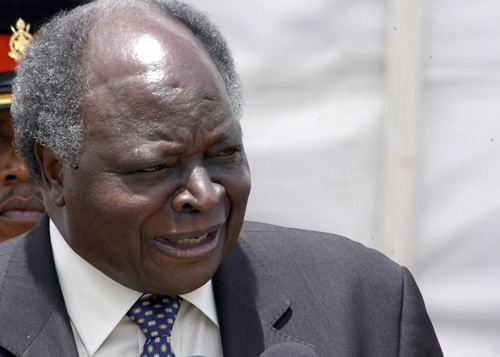 Former President Mwai Kibaki is admitted to Nairobi Hospital undergoing “management of severe pain as a result of an infection,” according to sources.

The ex-President was admitted on June 19 and was allocated a VIP ward where he has been receiving treatment for the last 10 days.

Kibaki, who served as Kenya’s third President between 2002-2013, is reported to have complained of pain in the lower abdomen.

“Samples were taken for testing in the lab. The results are out and nothing to worry about. His team of doctors are managing the pain,” the source said.

On Sunday, a source in the office of the former president said he is in the hospital for “routine medical check-up.” He is doing well, the source said.

“It is a normal visit and there is nothing new. He goes there more often for scheduled check-ups be it once in a month or even twice. So no [cause for] alarm,” one of his aides told the Star on Sunday on the phone.

The official sought anonymity for he is not allowed to speak to the media on the matter. He referred the Star to the family for official comment.

Kibaki has maintained a low profile since exiting office in 2013 and was last seen in public in February at Parliament Buildings where the body of ex-President Daniel Moi lay in state.

The 89-year-old made his way into the precincts of Parliament via an alternative gate facing Continental House. He wore black orthopaedic shoes and had a brown walking stick.

The orthopaedic shoes are worn by people of all ages who are experiencing discomfort as they are designed to support the ankles and the soles.

According to Pedors, a leading supplier of orthopaedic shoes, the footwear is used by patients recovering from foot surgery and those with swollen feet, heel challenges, diabetes or arthritis.

In September last year, Kibaki was in London for a series of medical checks where his knee was also examined. It is understood that Mzee’s knee had been sore.

In December 2002, Kibaki was flown to the United Kingdom for treatment following an accident in Machakos.

The then Opposition leader and his entourage were coming from Machakos after a political rally.

He was elected president that year and sworn in as the country’s third President on December 30, 2002.

His victory was the result of a strong opposition coalition with LDP leader Raila Odinga among other top opposition politicians. Narc rode to power on the promise of change.

Kibaki had also been admitted to The Nairobi Hospital on January 20, 2004, for what doctors said was a blood clot in his right leg. He was also diagnosed with mild high blood pressure at the time.

He was discharged eight days later and was able to walk for the first time since his traffic accident at the Machakos junction. He walked slowly with a crutch.

In 2016, the ex-President was flown to South Africa where he successfully underwent surgery on the carotid artery.

Kibaki took over from Moi when the economy was stunted but by end of his first term in 2007, the economy had grown to seven per cent.

However, that would be reversed due to the disputed presidential election results between him and Raila in 2007 and 2008.

When Moi took over power from the founding President Jomo Kenyatta in 1978, he picked Kibaki as his vice president. Kibaki also served as minister for finance and economic planning, home affairs and health under Moi.

In 1990, Kibaki left Kanu to form the Democratic Party which he used in 1992 to contest the presidential election. He came third in that election.

1966 – Minister for Commerce and Industry

1969 – Minister of Finance and Economic Planning

2002 – DP among other opposition parties formed a coalition NARC

He won the December 2002 presidential election